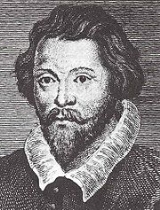 Overview
William Byrd was an English composer of the Renaissance
Renaissance music
Renaissance music is European music written during the Renaissance. Defining the beginning of the musical era is difficult, given that its defining characteristics were adopted only gradually; musicologists have placed its beginnings from as early as 1300 to as late as the 1470s.Literally meaning...
. He wrote in many of the forms current in England at the time, including various types of sacred and secular polyphony
Polyphony
In music, polyphony is a texture consisting of two or more independent melodic voices, as opposed to music with just one voice or music with one dominant melodic voice accompanied by chords ....
, keyboard (the so-called Virginalist
Virginalist
Virginalist denotes a composer of the so-called virginalist school, and usually refers to the English keyboard composers of the late Tudor and early Jacobean periods. The term does not appear to have been applied earlier than the 19th century...
school) and consort
Consort of instruments
A consort of instruments was a phrase used in England during the sixteenth and seventeenth centuries to indicate an instrumental ensemble. These could be of the same or a variety of instruments. Consort music enjoyed considerable popularity at court and in households of the wealthy in the...
music.
Knowledge of Byrd's biography expanded in the late 20th century, thanks largely to the research of John Harley (Harley, 1997). Following the discovery of a document dated 2 October 1598 in which Byrd's age is given as "58 years or there abouts," it now appears that he was born in 1540.

What are some of his songs

What was some of the compareson with william byrds two marriages to other colonial american marriages ?
More
x