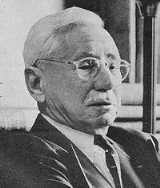 Overview
William James Durant was a prolific American
United States
The United States of America is a federal constitutional republic comprising fifty states and a federal district...
writer, historian
Historian
A historian is a person who studies and writes about the past and is regarded as an authority on it. Historians are concerned with the continuous, methodical narrative and research of past events as relating to the human race; as well as the study of all history in time. If the individual is...
, and philosopher. He is best known for The Story of Civilization
The Story of Civilization
The Story of Civilization, by husband and wife Will and Ariel Durant, is an eleven-volume set of books covering Western history for the general reader...
, 11 volumes written in collaboration with his wife Ariel Durant
Ariel Durant
Ariel Durant was the co-author of The Story of Civilization.-Biography:Durant was born in Proskurov as Chaya Kaufman to Ethel Appel Kaufman and Joseph Kaufman. The family emigrated to the United States in 1901. She met her future husband, Will Durant, while a student at Ferrer Modern School in...
and published between 1935 and 1975. He was earlier noted for The Story of Philosophy
The Story of Philosophy
The Story of Philosophy: the Lives and Opinions of the Greater Philosophers is a book by Will Durant that profiles several prominent Western philosophers and their ideas, beginning with Plato and on through Friedrich Nietzsche...
, written in 1926, which one observer described as "a groundbreaking work that helped to popularize philosophy."

He conceived of philosophy as total perspective, or, seeing things "sub specie totius," a phrase derived from Spinoza's "sub specie aeternitatis." He sought to unify and humanize the great body of historical knowledge, which had grown too voluminous and become fragmented into esoteric specialties, and to vitalize it for contemporary application.

It is true that even across the Himalayan barrier India has sent to the west, such gifts as grammar and logic, philosophy and fables, hypnotism and chess, and above all numerals and the decimal system.

Rooted in freedom, bonded in the fellowship of danger, sharing everywhere a common human blood, we declare again that all men are brothers, and that mutual tolerance is the price of liberty.