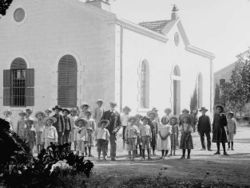 Wilhelma was a German
Germany
Germany , officially the Federal Republic of Germany , is a federal parliamentary republic in Europe. The country consists of 16 states while the capital and largest city is Berlin. Germany covers an area of 357,021 km2 and has a largely temperate seasonal climate...
Templer
Templers (religious believers)
Templers are members of the Temple Society , a German Protestant sect with roots in the Pietist movement of the Lutheran Church. The Templers were expelled from the church in 1858 because of their millennial beliefs. Their aim was to realize the apocalyptic visions of the prophets of Israel in the...
colony in Palestine
Palestine
Palestine is a conventional name, among others, used to describe the geographic region between the Mediterranean Sea and the Jordan River, and various adjoining lands....
located southwest of al-'Abbasiyyah near Jaffa
Jaffa
Jaffa is an ancient port city believed to be one of the oldest in the world. Jaffa was incorporated with Tel Aviv creating the city of Tel Aviv-Yafo, Israel. Jaffa is famous for its association with the biblical story of the prophet Jonah.-Etymology:...
.

Wilhelma-Hamîdije was named in honour of King William II of Württemberg
William II of Württemberg
William II was the fourth King of Württemberg, from 6 October 1891 until the abolition of the kingdom on 30 November 1918...
, Emperor Wilhelm II
William II, German Emperor
Wilhelm II was the last German Emperor and King of Prussia, ruling the German Empire and the Kingdom of Prussia from 15 June 1888 to 9 November 1918. He was a grandson of the British Queen Victoria and related to many monarchs and princes of Europe...
and Sultan Abdul Hamid II
Abdul Hamid II
His Imperial Majesty, The Sultan Abdülhamid II, Emperor of the Ottomans, Caliph of the Faithful was the 34th sultan of the Ottoman Empire...
, however, only the first half of the name prevailed. Wilhelma was established by German settlers in 1902 in Palestine then under Ottoman rule.

In July 1918, the German residents of Wilhelma were interred at Helouan, near Cairo
Cairo
Cairo , is the capital of Egypt and the largest city in the Arab world and Africa, and the 16th largest metropolitan area in the world. Nicknamed "The City of a Thousand Minarets" for its preponderance of Islamic architecture, Cairo has long been a centre of the region's political and cultural life...
in Egypt. They were returned to Palestine in January 1921.

During the inter-war years the colony produced dairy goods and wine in collaboration with the German colony at Sarona.

During World War II
World War II
World War II, or the Second World War , was a global conflict lasting from 1939 to 1945, involving most of the world's nations—including all of the great powers—eventually forming two opposing military alliances: the Allies and the Axis...
, Wilhelma was transformed into an internment camp by the British Mandatory authorities where German settlers from Wilhelma and other localities such as Sarona as well as other enemy aliens (such as Hungarians and Italians) were concentrated and held. In World War II, guarded by Jewish police, the camp was under an early night curfew. Detainees were held there until April 1948 when the last of them were moved out to Germany or resettled in Australia
Australia
Australia , officially the Commonwealth of Australia, is a country in the Southern Hemisphere comprising the mainland of the Australian continent, the island of Tasmania, and numerous smaller islands in the Indian and Pacific Oceans. It is the world's sixth-largest country by total area...
.

Three Jewish settlements of the Moshav
Moshav
Moshav is a type of Israeli town or settlement, in particular a type of cooperative agricultural community of individual farms pioneered by the Labour Zionists during the second aliyah...
were established on this land in 1948. The first was abandoned on May 15, 1948 after being overrun by the Arab Legion
Arab Legion
The Arab Legion was the regular army of Transjordan and then Jordan in the early part of the 20th century.-Creation:...
. The second was established by a Hapoel Hamizrahi group. The third was established by the Tehiya
Tehiya
Tehiya , originally known as Banai , then Tehiya-Bnai , was a small right-wing political party in Israel that existed from 1979 until 1992...
group of the Hapoel Haizrahi.

Wilhelma is now the site of the Israeli locality of Bnei Atarot
Bnei Atarot
Bnei Atarot is a moshav in central Israel. Located near Yehud, around 15 kilometres east of Tel Aviv, it is situated in fertile plain at the eastern rim of Tel Aviv metropolitan area next to Ben Gurion Airport and falls under the jurisdiction of Hevel Modi'in Regional Council...
.
The source of this article is wikipedia, the free encyclopedia.  The text of this article is licensed under the GFDL.