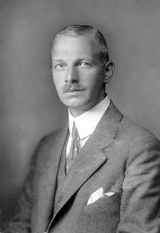 Encyclopedia
Wilhelm Carl Josef Cuno (July 2, 1876 - January 3, 1933) was a German
Germany
Germany , officially the Federal Republic of Germany , is a federal parliamentary republic in Europe. The country consists of 16 states while the capital and largest city is Berlin. Germany covers an area of 357,021 km2 and has a largely temperate seasonal climate...
politician
Politician
A politician, political leader, or political figure is an individual who is involved in influencing public policy and decision making...
who was the Chancellor of Germany from 1922 to 1923. He was born in Suhl
Suhl
- Geography :Suhl sits on the south edge of the Suhler Scholle, an upthrust granite complex that is streaked by numerous dikes. This is part of the Ruhla-Schleusingen Horst that defines the southwest side of the Thuringian Forest...
, Prussian Saxony
Province of Saxony
The Province of Saxony was a province of the Kingdom of Prussia and later the Free State of Prussia from 1816 until 1945. Its capital was Magdeburg.-History:The province was created in 1816 out of the following territories:...
. Cuno's government is best known for its passive resistance of the French occupation of the Ruhr Area
Ruhr Area
The Ruhr, by German-speaking geographers and historians more accurately called Ruhr district or Ruhr region , is an urban area in North Rhine-Westphalia, Germany. With 4435 km² and a population of some 5.2 million , it is the largest urban agglomeration in Germany...
(1922-1923). Cuno's government was also responsible for its poor handling of economic problems. In order to pay off the state's debts, the government under Cuno printed vast amounts of money, leading to hyperinflation
Hyperinflation
In economics, hyperinflation is inflation that is very high or out of control. While the real values of the specific economic items generally stay the same in terms of relatively stable foreign currencies, in hyperinflationary conditions the general price level within a specific economy increases...
which peaked in the summer of 1923. A wave of strikes
Cuno strikes
The Cuno strikes were nation-wide strikes in Germany against the government of Reich chancellor Wilhelm Cuno in August 1923. The wave of strikes demanded and helped bring about the resignation of the Cuno government on August 12, 1923, just nine months after it began...
began in August 1923 and on Cuno and his cabinet resigned on August 12, 1923.

Cuno received education as a lawyer in Berlin
Berlin
Berlin is the capital city of Germany and is one of the 16 states of Germany. With a population of 3.45 million people, Berlin is Germany's largest city. It is the second most populous city proper and the seventh most populous urban area in the European Union...
and Heidelberg
Heidelberg
-Early history:Between 600,000 and 200,000 years ago, "Heidelberg Man" died at nearby Mauer. His jaw bone was discovered in 1907; with scientific dating, his remains were determined to be the earliest evidence of human life in Europe. In the 5th century BC, a Celtic fortress of refuge and place of...
. He was employed by the Reich Treasury Department in 1907. During World War I
World War I
World War I , which was predominantly called the World War or the Great War from its occurrence until 1939, and the First World War or World War I thereafter, was a major war centred in Europe that began on 28 July 1914 and lasted until 11 November 1918...
Cuno was involved in arrangements for food supplies for the German army, but quit civil service to join the Hapag
Hamburg America Line
The Hamburg Amerikanische Packetfahrt Actien Gesellschaft was a transatlantic shipping enterprise established in Hamburg, Germany during...
shipping company in 1917. In December 1918 Cuno was promoted to the Hapag's general director. As an economic expert Cuno participated in the post-war negotiations on reparations and peace terms. The importance of his position as Hapag executive increased after the company became one of the leading shippers of goods between the U.S. and Germany.

After the downfall of his government, Cuno retired from politics and returned to the management of HAPAG.