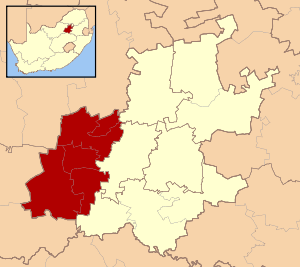 The West Rand is the name of the urban western part of the Witwatersrand
Witwatersrand
The Witwatersrand is a low, sedimentary range of hills, at an elevation of 1700–1800 metres above sea-level, which runs in an east-west direction through Gauteng in South Africa. The word in Afrikaans means "the ridge of white waters". Geologically it is complex, but the principal formations...
that is functionally merged with the Johannesburg
Johannesburg
Johannesburg also known as Jozi, Jo'burg or Egoli, is the largest city in South Africa, by population. Johannesburg is the provincial capital of Gauteng, the wealthiest province in South Africa, having the largest economy of any metropolitan region in Sub-Saharan Africa...
conurbation
Conurbation
A conurbation is a region comprising a number of cities, large towns, and other urban areas that, through population growth and physical expansion, have merged to form one continuous urban and industrially developed area...
. This area became settled by European
European ethnic groups
The ethnic groups in Europe are the various ethnic groups that reside in the nations of Europe. European ethnology is the field of anthropology focusing on Europe....
s after a gold-bearing
Gold
Gold is a chemical element with the symbol Au and an atomic number of 79. Gold is a dense, soft, shiny, malleable and ductile metal. Pure gold has a bright yellow color and luster traditionally considered attractive, which it maintains without oxidizing in air or water. Chemically, gold is a...
reef discovered in 1886 and sparked the gold rush
Gold rush
A gold rush is a period of feverish migration of workers to an area that has had a dramatic discovery of gold. Major gold rushes took place in the 19th century in Australia, Brazil, Canada, South Africa, and the United States, while smaller gold rushes took place elsewhere.In the 19th and early...
that gave rise to the establishment of Johannesburg.