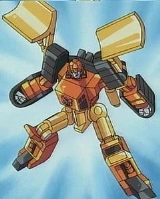 Encyclopedia
Wedge is a fictional character
Fictional character
A character is the representation of a person in a narrative work of art . Derived from the ancient Greek word kharaktêr , the earliest use in English, in this sense, dates from the Restoration, although it became widely used after its appearance in Tom Jones in 1749. From this, the sense of...
from the Transformers
Transformers: Robots in Disguise
Transformers: Robots in Disguise, known in Japan as , is a Japanese anime television series and serves as a self-contained universe separate from any of the other existing Transformers universes...
toy line and cartoon series.

The other Build Team Autobots look to Wedge as their leader, even though he's young. A natural leader-in-the-making. Can be reckless and make mistakes but will never jeapordize his friends. He carries a double beam guns.

In addition to their use of elemental-based attacks, each "adult" member of the Build Team provides a specific style of attack which each member bring to his specific version (based on who becomes the arms) of Landfill. Hightower/Build Cyclone's strength is powerful offensive attacks. Heavy Load/Build Typhoon brings martial arts and strong defenses, while Grimlock/Build Hurricane provides an even mix of offense and defense.

Robots in Disguise Wedge (in Wal-Mart yellow repaint colors) appeared in the 2004 BotCon
BotCon
BotCon, briefly known as "The Official Transformers Collectors' Convention" , is an annual convention for Transformers fans and collectors. BotCon has been held annually since 1994...
voice actor play.

Wedge's first toy is actually Japan's Build Boy, part of its Transformers: Car Robots line in 2000.
This toy was later redecoed into Universe Bonecrusher
Bonecrusher (Transformers)
Bonecrusher is the name of several fictional characters in the various Transformers universes.-Transformers: Generation 1:Bonecrusher is a member of the Constructicons. He is a brawler by nature and specialises in demolitions work...
.
When Wedge (the American equivalent) was released in 2001, mold and paint colors were slightly altered. The most noticeable differences are the lack of metallic elements used on the Build Team's American bodies, and the tampographing of Autobot insignias on each Build Team member. (Previously, only Build Boy/Wedge carried an insignia.)
Wedge was later recolored in yellow by Hasbro in 2003 for an Wal*Mart store exclusive and was packaged with his team. Although packages as part of Robots in Disguise many fans consider it to be an unofficial part of the Transformers: Universe
Transformers: Universe
Transformers: Universe is a line of toys that consists of re-painted and re-released toys from various Transformers lines of toys. For the comic book series see Transformers Universe .- Toy line :...
toy line by being released during the Universe time period. It is the last released toy of the RiD series before it was changed to Universe. This version of the Build Team appeared in the Transformers: Universe storyline presented at the BotCon
BotCon
BotCon, briefly known as "The Official Transformers Collectors' Convention" , is an annual convention for Transformers fans and collectors. BotCon has been held annually since 1994...
2005 voice actor play.