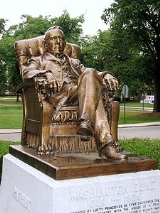 
George Washington Duke (December 18, 1820 – May 8, 1905) was an American tobacco
Tobacco
Tobacco is an agricultural product processed from the leaves of plants in the genus Nicotiana. It can be consumed, used as a pesticide and, in the form of nicotine tartrate, used in some medicines...
industrialist and philanthropist
Philanthropist
A philanthropist is someone who engages in philanthropy; that is, someone who donates his or her time, money, and/or reputation to charitable causes...
.

Duke was born in Orange County, North Carolina (present day Durham County
Durham County, North Carolina
-Demographics:As of the census of 2000, there were 223,314 people, 89,015 households, and 54,032 families residing in the county. The population density was 769 people per square mile . There were 95,452 housing units at an average density of 329 per square mile...
, North Carolina
North Carolina
North Carolina is a state located in the southeastern United States. The state borders South Carolina and Georgia to the south, Tennessee to the west and Virginia to the north. North Carolina contains 100 counties. Its capital is Raleigh, and its largest city is Charlotte...
), to Taylor Duke (c1770–1849) and Dicey Jones (c1780–1860). On August 9, 1842, he married Mary Caroline Clinton (1825–1847) with whom he had two children: Sidney Taylor Duke (1844–1858) and Brodie Leonidas Duke (1846–1919).

Washington Duke served in the Confederate Navy (1863–1865) during the American Civil War
American Civil War
The American Civil War was a civil war fought in the United States of America. In response to the election of Abraham Lincoln as President of the United States, 11 southern slave states declared their secession from the United States and formed the Confederate States of America ; the other 25...
against his will. He has been alleged to have been opposed to slavery but was recorded selling some of his slaves just before conscription to the war and likely used slaves in growing his tobacco enterprise. Washington was not actually recorded selling slaves. He mentioned that slaves might be sold at the same time as his sale. He did not say they were his slaves and, in fact, the 1860 census, just prior to this "recorded" event shows that he did not own slaves.

After the war, he grew tobacco, but in 1874, he sold his rural home and moved to the city of Durham
Durham, North Carolina
Durham is a city in the U.S. state of North Carolina. It is the county seat of Durham County and also extends into Wake County. It is the fifth-largest city in the state, and the 85th-largest in the United States by population, with 228,330 residents as of the 2010 United States census...
, where he began his tobacco business. His workers hand processed tobacco into a form that could be sold by the bag for pipe smokers or hand rolled into cigarettes. In 1881, the W. Duke Sons and Company was established as a tobacco manufacturer and was soon a marketer of pre-rolled cigarettes. In 1884 he was nominated by the Republican Party for North Carolina State Treasurer
North Carolina State Treasurer
The North Carolina State Treasurer is a statewide elected office in the U.S. state of North Carolina responsible for overseeing the financial operations of state government. The current state treasurer is Janet Cowell....
, an elected position, and lost.

After a "tobacco war" among the five large manufacturers, Washington's son James Duke became president of the dominant American Tobacco Company
American Tobacco Company
The American Tobacco Company was a tobacco company founded in 1890 by J. B. Duke through a merger between a number of U.S. tobacco manufacturers including Allen and Ginter and Goodwin & Company...
and son Benjamin its vice-president. They would build the company into a multi-national corporation and a monopoly
Monopoly
A monopoly exists when a specific person or enterprise is the only supplier of a particular commodity...
. In 1880 the Dukes were residing in Durham, and Washington was living with his son James and two sisters-in-law: Bettie Roney (born c.1830) and Annie Roney (born c.1846). Also in the household were Jennie Procter (born c.1862) as "house assistant" and two servants: Louisa Sparkman (born c.1867); and Laura Hopkins (born c.1869).

Duke used his influence to have Trinity College moved to Durham. The institution opened its new campus in 1892 with him and son Benjamin as its principal benefactors. In 1896, Duke gifted the college with $100,000 (about $2,200,000 in 2005 dollars
Inflation
In economics, inflation is a rise in the general level of prices of goods and services in an economy over a period of time.When the general price level rises, each unit of currency buys fewer goods and services. Consequently, inflation also reflects an erosion in the purchasing power of money – a...
) on the condition that it open its doors to women. Trinity College was renamed in honor of Duke in 1924, becoming Duke University
Duke University
Duke University is a private research university located in Durham, North Carolina, United States. Founded by Methodists and Quakers in the present day town of Trinity in 1838, the school moved to Durham in 1892. In 1924, tobacco industrialist James B...
.