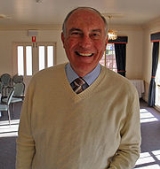 Truss's first attempt at a parliamentary seat was in the Queensland state parliament as the Nationals candidate at the 1988 Barambah by-election
Barambah state by-election, 1988
The Barambah state by-election, 1988 was a by-election held on 16 April 1988 for the Queensland Legislative Assembly seat of Barambah, based in the town of Kingaroy. The by-election was triggered by the resignation of National MP and former Premier Sir Joh Bjelke-Petersen...
, triggered by the retirement of former premier Joh Bjelke-Petersen
Joh Bjelke-Petersen
Sir Johannes "Joh" Bjelke-Petersen, KCMG , was an Australian politician. He was the longest-serving and longest-lived Premier of Queensland, holding office from 1968 to 1987, a period that saw considerable economic development in the state...
. However, Truss lost in an upset to the Citizens Electoral Council
Citizens Electoral Council
The Citizens Electoral Council of Australia is a minor nationalist political party in Australia affiliated with the international LaRouche Movement, led by American political activist and conspiracy theorist Lyndon LaRouche. It reported having 549 members in 2007...
candidate Trevor Perrett
Trevor Perrett
Trevor John Perrett is a former Australian politician. He was a member of the Queensland Legislative Assembly from 1988 to 1998, representing the electorate of Barambah....
, who later joined the National Party.

In June 2005 John Anderson
John Anderson (Australian politician)
John Duncan Anderson AO is a former Australian politician. He served as the Deputy Prime Minister of Australia and Leader of the rural-based National Party of Australia from July 1999 to July 2005.-Early years:...
announced his intention to resign as National Party Leader. Deputy Leader Mark Vaile
Mark Vaile
Mark Anthony James Vaile , Australian politician, is a former Deputy Prime Minister of Australia and former leader of the National Party of Australia.-Early life:...
was elected the new Leader, and Truss was elected Deputy Leader. In the reshuffled ministry following Anderson's resignation Truss became Minister for Transport and Regional Services
Minister for Infrastructure, Transport, Regional Development and Local Government (Australia)
The Australian Minister for Infrastructure and Transport is the Hon Anthony Albanese. On 3 December 2007 he replaced the Minister for Transport and Regional Services, the Hon Mark Vaile, who held office since August 2006, and the Minister for Local Government, Territories and Roads, the Hon Jim...
. 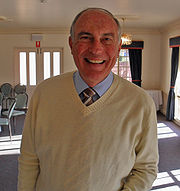 After the election, Mark Vaile declined to continue in his role as National Party Leader, citing the party's need for "generational renewal". Truss was elected leader of the federal National Party of Australia on 3 December 2007.

In 2008, Coalition leader Malcolm Turnbull
Malcolm Turnbull
Malcolm Bligh Turnbull is an Australian politician. He has been a member of the Australian House of Representatives since 2004, and was Leader of the Opposition and parliamentary leader of the Liberal Party from 16 September 2008 to 1 December 2009.Turnbull has represented the Division...
appointed Truss as Shadow Minister for Trade, Transport, Regional Development and Local Government. He retained that portfolio after Tony Abbott
Tony Abbott
Anthony John "Tony" Abbott is the Leader of the Opposition in the Australian House of Representatives and federal leader of the centre-right Liberal Party of Australia. Abbott has represented the seat of Warringah since the 1994 by-election...
became Coalition leader in late 2009. Following the 2010 election, Truss became Shadow Minister for Infrastructure and Transport.