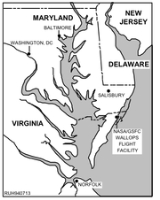 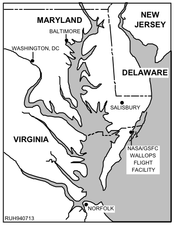 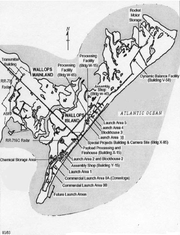 Wallops Island is a 6 square miles (15.5 km²) island off the east coast of Virginia
Virginia
The Commonwealth of Virginia , is a U.S. state on the Atlantic Coast of the Southern United States. Virginia is nicknamed the "Old Dominion" and sometimes the "Mother of Presidents" after the eight U.S. presidents born there...
, part of the barrier islands that stretch along the eastern seaboard
Eastern seaboard
An Eastern seaboard can mean any easternmost part of a continent, or its countries, states and/or cities.Eastern seaboard may also refer to:* East Coast of Australia* East Coast of the United States* Eastern Seaboard of Thailand-See also:...
of the United States of America.

Wallops Island proper, originally known as Kegotank Island, was granted to John Wallop by the Crown on April 29, 1692. Ownership was divided down through the years, until the Commonwealth of Virginia seized the property in 1876 and 1877 in lieu of unpaid taxes. From 1877, ownership was again divided and sub-divided until 1889, when it was held by various trustees for the Wallops Island Club. The Club was incorporated and assumed ownership in 1933 as the Wallops Island Association, Inc. Association members and their families spent the summers fishing and swimming on the island. The Association grazed sheep, cattle, and ponies on the area until the mid-1940s. In 1947, the U.S. Navy began using the upper two-thirds of the island on a lease-rental basis for aviation ordnance testing. N.A.C.A.
National Advisory Committee for Aeronautics
The National Advisory Committee for Aeronautics was a U.S. federal agency founded on March 3, 1915 to undertake, promote, and institutionalize aeronautical research. On October 1, 1958 the agency was dissolved, and its assets and personnel transferred to the newly created National Aeronautics and...
(The National Advisory Committee for Aeronautics), forerunner of NASA
NASA
The National Aeronautics and Space Administration is the agency of the United States government that is responsible for the nation's civilian space program and for aeronautics and aerospace research...
, leased the lower 1000 acres (4 km²) for rocket launching facilities.