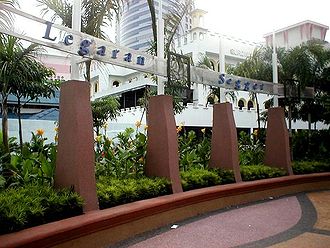 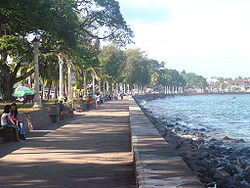 In US English, a walkway is a composite or umbrella term for all engineered surfaces or structures which support the use of trails. These include sidewalk
Sidewalk
A sidewalk, or pavement, footpath, footway, and sometimes platform, is a path along the side of a road. A sidewalk may accommodate moderate changes in grade and is normally separated from the vehicular section by a curb...
s, footbridges, stile
Stile
A stile is a structure which provides people a passage through or over a fence or boundary via steps, ladders, or narrow gaps. Stiles are often built in rural areas or along footpaths to allow access to an adjacent field or area separated by a fence, wall or hedge...
s, stairs
Stairway
Stairway, staircase, stairwell, flight of stairs, or simply stairs are names for a construction designed to bridge a large vertical distance by dividing it into smaller vertical distances, called steps...
, ramp
Inclined plane
The inclined plane is one of the original six simple machines; as the name suggests, it is a flat surface whose endpoints are at different heights. By moving an object up an inclined plane rather than completely vertical, the amount of force required is reduced, at the expense of increasing the...
s, paseos or tunnel
Tunnel
A tunnel is an underground passageway, completely enclosed except for openings for egress, commonly at each end.A tunnel may be for foot or vehicular road traffic, for rail traffic, or for a canal. Some tunnels are aqueducts to supply water for consumption or for hydroelectric stations or are sewers...
s. Walkways can also be used by passengers to board or disembark from an aircraft
Aircraft
An aircraft is a vehicle that is able to fly by gaining support from the air, or, in general, the atmosphere of a planet. An aircraft counters the force of gravity by using either static lift or by using the dynamic lift of an airfoil, or in a few cases the downward thrust from jet engines.Although...
to the terminal
Airport terminal
An airport terminal is a building at an airport where passengers transfer between ground transportation and the facilities that allow them to board and disembark from aircraft....
building.

In UK English, walkway more specifically means a covered or raised passage in a building or a wide walk in a park or garden.

A walkway can be at ground level, elevated, such as a boardwalk, or floating. It can be a simple paved path or something more complex to cross a road or a body of water. An open pedestrian overpass
Footbridge
A footbridge or pedestrian bridge is a bridge designed for pedestrians and in some cases cyclists, animal traffic and horse riders, rather than vehicular traffic. Footbridges complement the landscape and can be used decoratively to visually link two distinct areas or to signal a transaction...
or a special tunnel are also examples of walkways.