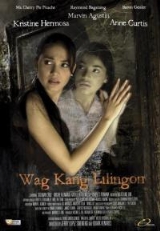 Encyclopedia
Wag Kang Lilingon is a 2006
2006 in film
- Highest-grossing films :Please note that following the tradition of the English-language film industry, these are the top-grossing films that were first released in the United States in 2006...
Filipino
Philippines
The Philippines , officially known as the Republic of the Philippines , is a country in Southeast Asia in the western Pacific Ocean. To its north across the Luzon Strait lies Taiwan. West across the South China Sea sits Vietnam...
Star Cinema
Star Cinema
ABS-CBN Film Productions, Inc. , is the wholly owned film production subsidiary of ABS-CBN Corporation. It is the Philippines' largest film production, producing most of the highest grossing films in the Philippines.-1994:...
and Viva Films
VIVA Films
Viva Films is a Filipino film production company which started in 1981. This company is part of the Viva Entertainment Group.-Sharon Cuneta and Gabby Concepcion loveteam:...
film starring Anne Curtis
Anne Curtis
Anne Ojales Curtis-Smith, also known as Anne Curtis is a Filipino-Australian actress, model, television host, singer and VJ currently active in the Philippines....
and Kristine Hermosa
Kristine Hermosa
Kristine Hermosa-Sotto on September 9, 1983 in Quezon City, Philippines) is a Filipina actress. She is well known for portraying the role of Yna Macaspac in the primetime drama series, Pangako sa 'Yo....
. The movie is directed by Jerry Lopez Sinengneng and Quark Henares.This is the first movie produced by Viva Films and Star Cinema years after Viva
VIVA Entertainment
VIVA Entertainment, Inc., also known as Viva Entertainment Group is a Philippine entertainment company. Its history started in 1981 when Vicente "Vic" del Rosario, Jr. founded Viva Films.-Divisions:*Viva Productions, Inc...
split from ABS-CBN
ABS-CBN
ABS–CBN Corporation is a Philippine-based media conglomerate. It is the Philippines' largest media and entertainment conglomerate. The corporation was the merger of Alto Broadcasting System which at that time owned by James Lindenberg and Antonio Quirino, and the Chronicle Broadcasting Network ...
in 2001.

"Wag Kang Lilingon" is divided into two stories: Uyayi and Salamin. Each of the two episodes brings one mission: let the audience scream out loud.

Uyayi (Lullaby) opens with the story of an obscure hospital being gripped by controversy because of its strange nature.

An obscure hospital named the Angel of Mercy hospital was haunted by unknown spirits. Most of the victims are male patients. A nurse named Melissa (Anne Curtis) points the finger of blame to Dr. Carl (Raymond Bagatsing), one of the superior doctors of the aforementioned hospital.

A frantic Melissa seeks help from her boyfriend James (Marvin Agustin). Melissa and James conclude that someone or something makes the patients die. James offered to spy at the hospital, pretending to be a sick patient to investigate if Dr. Carl is indeed the killer. They even interviewed a patient, to no avail, gaining no information.

The next night at 3AM, the spirits attacked again, this time killing another patient. Some doctors speculated that he died in a nightmare. Worse, Melissa discovered that James had a girlfriend before thus making a temporary turmoil between them. James and Melissa's plan failed.

The tide began to turn, one night, when Dr. Carl was found dead in his car. Sensing danger, Melissa's sanity began to wane: she wonders if the culprit is human. A series of apparitions began to manifest themselves, driving her crazy.

The conclusion of it all began at the 3AM next morning. The hauntings worsened: she began to see hallucinations of James being murdered. Finally, the young journalist calmed her down and formulated their next move.

Surprisingly, Melissa began to hum a lullaby: a very spine-chilling lullaby resembling a mockingbird
Mockingbird
Mockingbirds are a group of New World passerine birds from the Mimidae family. They are best known for the habit of some species mimicking the songs of other birds and the sounds of insects and amphibians, often loudly and in rapid succession. There are about 17 species in three genera...
's song. James, then, was pushed back by Melissa into a shelf of chemicals and the nurse began to kill him as well. It was revealed that Melissa was the real culprit.

For the edge-driving finale, Salamin (Mirror/Lens) grips us into the uncanny tale of a family moving into a new house, which was seemed uninhabited for years. This old house has nothing, even electricity, making the atmosphere horrible.

Rosing (Ms. Cherry Pie Picache), along with her daughters Angel (Kristine Hermosa) and Nina (Celine Lim) begin a new life at their new home. However, Rosing detects the smell of blood. It was happening ever since they sat foot at the house. Angel dismisses it, saying she is sick. The girls explored the rest of the house, saying it was perfect. Meanwhile, Nina tries to open a door leading to the basement, but to no avail.

One night, during a happy dance and dinner, the mysterious door opened itself. This door was the one Nina was trying to open that morning. They examined the basement to see an antique-looking mirror. Angel then told Nina of a superstition: once you lighted a candle in front of a mirror, during a full moon, make a wish and it will come true. Rosing objected to their plan, saying it's too dangerous.

So dangerous it is. Immediately, after their little "ritual", strange things began to stir the atmosphere. What the girls don't know, they have conjured the spirits from the mirror. The mirror was supposed to be a portal of lost souls, whom they have summoned after their candle-lighting incident. However, the ghosts do not reveal themselves yet.

Aside to the growing turmoil inside the house, Angel's boyfriend Lander's (Archie Alemania) unfaithfulness adds strain to their relationship causing them to be estranged. Thus, they have no contact to each other.

The hauntings began to worsen. A frantic Angel seeks help from her psychic friend Trixie (Dimples Romana). Their guts were right: Trixie told them that the spirits from the mirror were souls of the previous tenants of the house. They weren't just one, but many of them. And there is only one culprit. Angel and Trixie have decided to get rid of the mirror, dumping it in the river.

Rosing decided to bless the house. However, the hauntings worsened. Until one morning, after another haunting incident, the family had had enough. They hastily packed and were to move to Trixie's house. Before they depart, Angel saw another mirror that foresaw that her family will die.

At Trixie's house, the spirits have followed them relentlessly. That night, Angel decided to stop it all and trekked back to their old house. There, she learns that the house caretaker Nestor (Soliman Cruz) was the culprit on the crimes that happened.

The chase begins here. Trixie, Rosing and Nina came to Angel's aid; however, Trixie was bludgeoned in the head. They were forced to abandon her. Angel, Rosing and Nina tried to flee but they were cornered: Angel and Rosing were stabbed; Nina, the remaining survivor, was pursued by Nestor in the attic, where the latter hums the lullaby (the same lullaby in Uyayi Episode)to lure the terrified little girl. A bleeding Angel hits Nestor in the head, killing him.

The ending of Wag Kang Lilingon winds up being the epilogue to Salamin and a prologue to Uyayi. It turns out that in Salamin, after the tragic events leaves Nina an orphan, she is placed with an adoption agency and changes her name from Nina to Melissa (the same Melissa in Uyayi). She leaves for the United States
United States
The United States of America is a federal constitutional republic comprising fifty states and a federal district...
, where she studies nursing for the next 6 years, only to return to the Philippines
Philippines
The Philippines , officially known as the Republic of the Philippines , is a country in Southeast Asia in the western Pacific Ocean. To its north across the Luzon Strait lies Taiwan. West across the South China Sea sits Vietnam...
to work at the Angel of Mercy hospital. It is then revealed that her childhood home was demolished and the hospital was erected in its place. The spirits that haunts the Angel of Mercy hospital are the same ghosts that haunted Nina/Melissa's old house.

The movie ends with Nina/Melissa driving James' body to Angel's dream house, which the audience was privy to in Salamin. Still wracked with guilt, Melissa delude herself into believing her mother, Angel and James are still alive and pretends to have dinner with them. "Angel" tells Melissa that she can't hold them in the mortal coil like this, and as the camera zooms out, it is shown that Nina/Melissa is actually carrying the entire conversation in her head, she is actually not talking to anyone and James is still very dead. Melissa imagines that she hears James whisper her name, then leans in closer towards him. Suddenly, James awakens from his unconscious state and grabs her by the neck. The film ends abruptly.

There were repeating themes in Wag Kang Lilingon that tied the two stories of Angel and Melissa.