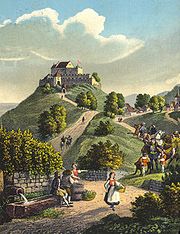 The Württemberg Mausoleum is a memorial in the Rotenberg part of Untertürkheim in Stuttgart
Stuttgart
Stuttgart is the capital of the state of Baden-Württemberg in southern Germany. The sixth-largest city in Germany, Stuttgart has a population of 600,038 while the metropolitan area has a population of 5.3 million ....
, Germany
Germany
Germany , officially the Federal Republic of Germany , is a federal parliamentary republic in Europe. The country consists of 16 states while the capital and largest city is Berlin. Germany covers an area of 357,021 km2 and has a largely temperate seasonal climate...
. The mausoleum stands on the peak of Württemberg Hill
Württemberg (mountain)
The Württemberg is a mountain on the territory of the German city of Stuttgart, capital of Baden-Württemberg...
at the westernmost end of Schurwald
Schurwald
The Schurwald is a wooded mountain range in Baden-Württemberg, southern Germany, which at its highest point is 513.2 m above sea level.It is one of the most important Recreation areas for the Stuttgart area...
woods overlooking the Neckar
Neckar
The Neckar is a long river, mainly flowing through the southwestern state of Baden-Württemberg, but also a short section through Hesse, in Germany. The Neckar is a major right tributary of the River Rhine...
river. The memorial was built for Catherine Pavlovna of Russia
Catherine Pavlovna of Russia
Grand Duchess Catherine Pavlovna of Russia was the fourth daughter of Tsar Paul I of Russia and Princess Sophie Dorothea of Württemberg. She became the Queen of Württemberg upon her marriage to her first cousin Crown Prince William who eventually became King William I of Württemberg in...
(1788–1819), the second wife of William I
William I of Württemberg
William I was the second King of Württemberg from October 30, 1816 until his death.He was born in Lüben, the son of King Frederick I of Württemberg and his wife Duchess Augusta of Brunswick-Wolfenbüttel .-First marriage:...
of Württemberg
Württemberg
Württemberg , formerly known as Wirtemberg or Wurtemberg, is an area and a former state in southwestern Germany, including parts of the regions Swabia and Franconia....
(1781–1864). The remains of William I and his daughter Maria Friederike Charlotte of Württemberg (1816–1887) are also housed in the mausoleum.

The mausoleum was built after the death of Queen Catherine between 1820 and 1824 based on a design drafted by Giovanni Salucci. The location on the former site of Fort Wirtemberg
Burg Wirtemberg
Wirtemberg Castle was the ancestral castle of the rulers of Württemberg on the Württemberg mountain, located 411 m above sea level in the current municipality of Rotenberg in Stuttgart, between Bad Cannstatt and Esslingen am Neckar...
was chosen as the home of the House of Württemberg
Württemberg
Württemberg , formerly known as Wirtemberg or Wurtemberg, is an area and a former state in southwestern Germany, including parts of the regions Swabia and Franconia....
.

Between 1825 and 1899 the mausoleum was used as a Russian Orthodox Church
Russian Orthodox Church
The Russian Orthodox Church or, alternatively, the Moscow Patriarchate The ROC is often said to be the largest of the Eastern Orthodox churches in the world; including all the autocephalous churches under its umbrella, its adherents number over 150 million worldwide—about half of the 300 million...
place of worship. The memorial is still used to this day for a Russian Orthodox service every Pentecost
Pentecost
Pentecost is a prominent feast in the calendar of Ancient Israel celebrating the giving of the Law on Sinai, and also later in the Christian liturgical year commemorating the descent of the Holy Spirit upon the disciples of Christ after the Resurrection of Jesus...
.

The mausoleum is inspired by the Villa Capra "La Rotonda" build by Andrea Palladio
Andrea Palladio
Andrea Palladio was an architect active in the Republic of Venice. Palladio, influenced by Roman and Greek architecture, primarily by Vitruvius, is widely considered the most influential individual in the history of Western architecture...
. The building stands by itself in the middle of the vineyards along the river Neckar
Neckar
The Neckar is a long river, mainly flowing through the southwestern state of Baden-Württemberg, but also a short section through Hesse, in Germany. The Neckar is a major right tributary of the River Rhine...
making it visible from afar.