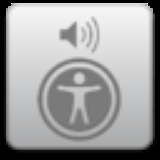 Encyclopedia
VoiceOver is a screen reader
Screen reader
A screen reader is a software application that attempts to identify and interpret what is being displayed on the screen . This interpretation is then re-presented to the user with text-to-speech, sound icons, or a Braille output device...
built into Apple Inc.'s Mac OS X
Mac OS X
Mac OS X is a series of Unix-based operating systems and graphical user interfaces developed, marketed, and sold by Apple Inc. Since 2002, has been included with all new Macintosh computer systems...
, iOS and iPod
IPod
iPod is a line of portable media players created and marketed by Apple Inc. The product line-up currently consists of the hard drive-based iPod Classic, the touchscreen iPod Touch, the compact iPod Nano, and the ultra-compact iPod Shuffle...
operating systems. By using VoiceOver, the user can access their Macintosh or iOS device based on spoken descriptions and, in the case of the Mac, the keyboard
Computer keyboard
In computing, a keyboard is a typewriter-style keyboard, which uses an arrangement of buttons or keys, to act as mechanical levers or electronic switches...
. The feature is designed to increase accessibility for blind and low-vision users, as well as for users with dyslexia
Dyslexia
Dyslexia is a very broad term defining a learning disability that impairs a person's fluency or comprehension accuracy in being able to read, and which can manifest itself as a difficulty with phonological awareness, phonological decoding, orthographic coding, auditory short-term memory, or rapid...
. VoiceOver is included on the latest versions of Apple's iPod Shuffle
IPod shuffle
The iPod Shuffle is a digital audio player designed and marketed by Apple Inc. It is the smallest model in Apple's iPod family, and was the first to use flash memory...
and iPod Nano
IPod nano
iPod Nano is a digital media player designed and marketed by Apple Inc.. The first generation of iPod Nano was introduced on September 7, 2005 as a replacement for iPod Mini. It uses flash memory for storage. iPod Nano has gone through six models, or generations, since its introduction...
, as well as recent Macs
Macs
Macs may refer to:*Mac or Macintosh*"macs" , a short story by Terry Bisson*Mac's Convenience Stores, a chain of stores in Canada*Magnetic-activated cell sorting*Metropolitan Area Commuter System, a bus system in Fairbanks, Alaska...
and iOS devices.

VoiceOver was first introduced in Mac OS X 10.4 and the target was users who had difficulty in reading due to vision impairment, particularly the blind
Blindness
Blindness is the condition of lacking visual perception due to physiological or neurological factors.Various scales have been developed to describe the extent of vision loss and define blindness...
.

VoiceOver can read typed text, or it can also read out what screen elements are visible or focused. VoiceOver also includes support for many Braille displays
Refreshable Braille display
A refreshable Braille display or Braille terminal is an electro-mechanical device for displaying Braille characters, usually by means of raising dots through holes in a flat surface. Blind computer users, who cannot use a normal computer monitor, use it to read text output...
for those who are both blind and deaf. In addition, VoiceOver includes features for those that cannot use the mouse, such as keyboard based navigation. For users with MacBook
MacBook
The MacBook was a brand of Macintosh notebook computers built by Apple Inc. First introduced in May 2006, it replaced the iBook and 12-inch PowerBook series of notebooks as a part of the Apple–Intel transition. Positioned as the low end of the MacBook family, the Apple MacBook was aimed at the...
s or Magic Trackpad
Magic Trackpad
The Magic Trackpad is a multi-touch trackpad produced by Apple Inc. Announced on July 27, 2010, it is similar to the trackpad found on the current MacBook family of laptops, albeit 80% larger...
s, a number of special multitouch features are also available. An example of this is the capability of the trackpad to act as the screen. Rather than being used to move the mouse, the trackpad represents the active window, and you can tap anywhere to hear what is under your finger.

After its success on Macs, Apple added VoiceOver to the iPod Shuffle
IPod shuffle
The iPod Shuffle is a digital audio player designed and marketed by Apple Inc. It is the smallest model in Apple's iPod family, and was the first to use flash memory...
. This enabled users of the iPod Shuffle to minimally control the playback of songs by having titles read out. With the 2010 revision of iPod Shuffle, the user can also have VoiceOver read out playlists.

A few months later, with the release of the iPhone 3GS
IPhone
The iPhone is a line of Internet and multimedia-enabled smartphones marketed by Apple Inc. The first iPhone was unveiled by Steve Jobs, then CEO of Apple, on January 9, 2007, and released on June 29, 2007...
, VoiceOver was added to iOS. As a result of this, VoiceOver is now also available on the iPod touch
IPod touch
The iPod Touch is a portable media player, personal digital assistant, handheld game console, and Wi-Fi mobile device designed and marketed by Apple Inc. The iPod Touch adds the multi-touch graphical user interface to the iPod line...
. On the touch screen interface, VoiceOver lets users tap the screen without selecting the element. This means that a user can tap anywhere on the screen and find out if there is an element there without needing to see the screen. VoiceOver can also turn off the display but leave the touch screen sensitive to touch, saving battery power.

In September 2009, Apple launched this feature on the iPod Nano line.