Encyclopedia
The Vlora War or the War of 1920 ( or Lufta e Njëzetes) was a series of battles between an Italian forces garrisoned throughout Vlorë
Vlorë
Vlorë is one of the biggest towns and the second largest port city of Albania, after Durrës, with a population of about 94,000 . It is the city where the Albanian Declaration of Independence was proclaimed on November 28, 1912...
region and Albanian patriots divided in small groups of fighters. The war lasted three months and had great impact in the struggle of Albania for the safeguard of its territories at a time when Albanian borders and future were discussed in the Paris Peace Conference
Paris Peace Conference, 1919
The Paris Peace Conference was the meeting of the Allied victors following the end of World War I to set the peace terms for the defeated Central Powers following the armistices of 1918. It took place in Paris in 1919 and involved diplomats from more than 32 countries and nationalities...
. The Vlora War is seen as a turning point in the establishment of the Albanian independence

Before entering the First World War as an ally of Triple Entente
Triple Entente
The Triple Entente was the name given to the alliance among Britain, France and Russia after the signing of the Anglo-Russian Entente in 1907....
the Kingdom of Italy
Kingdom of Italy (1861–1946)
The Kingdom of Italy was a state forged in 1861 by the unification of Italy under the influence of the Kingdom of Sardinia, which was its legal predecessor state...
had signed the Secret Treaty of London in which Italy promised to declare war against Germany
Germany
Germany , officially the Federal Republic of Germany , is a federal parliamentary republic in Europe. The country consists of 16 states while the capital and largest city is Berlin. Germany covers an area of 357,021 km2 and has a largely temperate seasonal climate...
and Austria-Hungary
Austria-Hungary
Austria-Hungary , more formally known as the Kingdoms and Lands Represented in the Imperial Council and the Lands of the Holy Hungarian Crown of Saint Stephen, was a constitutional monarchic union between the crowns of the Austrian Empire and the Kingdom of Hungary in...
within a month, in exchange of some territorial gains at the end of the war. In this treaty the promised territories of Albania to Italy were treated in articles 6 and 7:


Article 6
Italy shall receive full sovereignty over Valona, the island of Saseno and surrounding territory...

Article 7
Having obtained the Trentino and Istria by Article 4, Dalmatia and the Adriatic islands by Article 5, and also the gulf of Valona, Italy undertakes, in the event a small, autonomous, and neutralized state being formed in Albania Italy not to oppose the possible desire of France, Great Britain, and Russia to repartition the northern and the southern districts of Albania between Montenegro, Serbia, and Greece. The southern coast of Albania, from the frontier of the Italian territory of Valona to Cape Stilos, is to be neutrazied. The Italy will be conceded the right of concluding the foreign relations of Albania; in any case, Italy will be bound to secure for Albania a territory sufficiently extensive to enable its frontiers to join those of Greece and Serbia to the west of Lake Ochrida ..

In 1920 in the Paris Peace Conference
Paris Peace Conference, 1919
The Paris Peace Conference was the meeting of the Allied victors following the end of World War I to set the peace terms for the defeated Central Powers following the armistices of 1918. It took place in Paris in 1919 and involved diplomats from more than 32 countries and nationalities...
the allies had still reached no decision on Albania's future, but Italy's claims to sovereignty over Vlorë had never been seriously challenged. Italian Prime Minister Nitti
Francesco Saverio Nitti
Francesco Saverio Vincenzo de Paola Nitti was an Italian economist and political figure. A Radical, he served as the 36th Prime Minister of Italy between 1919 and 1920....
had also hoped to obtain a mandate over the rest of the country according to the Secret Treaty of London

The war started on June 4, after the Italian general Settimo Piacentini
Settimo Piacentini
Settimio Piacentini was an Italian General of the Kingdom of Italy who actively participated in the World War I, especially in the Sixth and Seventh Battle of the Isonzo....
refused to hand over the Vlora district to the Albanian government. Albanian volunteers were organized by the National Defense Committee under the political leadership of Qazim Koculi
Qazim Koculi
Qazim Koculi was an Albanian politician of the early 20th century and one-day acting Prime Minister of Albania. He was also a distinguished military leader, having won the Vlora War in 1920, as the principal military commander of the Albanian forces.-Early life:Qazim, son of Muhamet Kociu, was...
and they reached the number of 4,000, while Ahmet Lepenica
Ahmet Lepenica
Ahmet Lepenica born Ahmet Islam Canaj was an Albanian fighter and commander, known for his role in Battle of Vlora when Albanian irregulars under his leadership, defeated a superior force of Italian troops. Ahmet Lepenica was born in 1872 in Lepenica village in Vlora region. As an adult he served...
was appointed their commander in chief. In the meantime, Italy had 20,000 well-armed soldiers in the area.

The advance of the Albanian troops, and the revolutionary movements in Italy made the reinforcements basically impossible. On August 2, 1920 the Albanian-Italian protocol was signed, upon which Italy would retreat from Albania. This gave an end to Italian claims for Vlora and a mandate over Albania, rescuing the territory of the Albanian state from further partition. A cease-fire was announced on August 5, ending all Italo-Albanian hostilities. 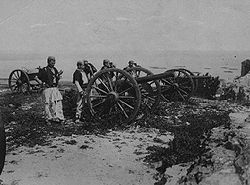 After three months of warfare an armistice treaty was signed between Italian and Albanian government.

The substance of the Agreement was as follows:

This treaty was the first diplomatic pact between Albania and a foreign power. Albania had used all its influence to obtain full and unreserved recognition by the Powers of the independence of Albania within 1913 frontier.