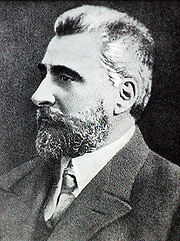 Vintilă Brătianu was a Romanian politician who served as Prime Minister of Romania
Romania
Romania is a country located at the crossroads of Central and Southeastern Europe, on the Lower Danube, within and outside the Carpathian arch, bordering on the Black Sea...
between 24 November 1927 and 2 November 1928.

Vintilă and his brothers Ion and Dinu
Dinu Bratianu
Dinu Brătianu , born Constantin I. C. Brătianu, was a Romanian politician, who led the National Liberal Party starting with 1934.-Early career:...
were the leaders of the National Liberal Party of Romania
National Liberal Party (Romania)
The National Liberal Party , abbreviated to PNL, is a centre-right liberal party in Romania. It is the third-largest party in the Romanian Parliament, with 53 seats in the Chamber of Deputies and 22 in the Senate: behind the centre-right Democratic Liberal Party and the centre-left Social...
. Born at his family's estate of Florica, in Ştefăneşti
Stefanesti, Arges
Ștefănești is a town in Argeș County, Romania. The town administers seven villages: Enculești, Golești, Izvorani, Ștefăneștii Noi, Valea Mare-Podgoria, Viișoara and Zăvoi....
, Argeş County
Arges County
Argeș is a county of Romania, in Wallachia, with the capital city at Pitești.-Demographics:In 2002, it had a population of 652,625 and the population density was 95/km².*Romanians – 96%*Roma , and other.-Geography:...
, he studied in France
France
The French Republic , The French Republic , The French Republic , (commonly known as France , is a unitary semi-presidential republic in Western Europe with several overseas territories and islands located on other continents and in the Indian, Pacific, and Atlantic oceans. Metropolitan France...
and after returning to Romania entered politics.

He was an adviser on economic affairs to the Liberal government led by his brother, Ion. During World War I
World War I
World War I , which was predominantly called the World War or the Great War from its occurrence until 1939, and the First World War or World War I thereafter, was a major war centred in Europe that began on 28 July 1914 and lasted until 11 November 1918...
, he was Minister for Munitions and after the war, he served in cabinet for six years, starting in 1922 as Finance Minister.