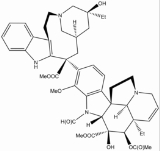 Overview
Vincristine formally known as leurocristine, sometimes abbreviated "VCR", is a vinca alkaloid from the Catharanthus roseus
Catharanthus roseus
Catharanthus roseus is a species of Catharanthus native and endemic to Madagascar. Synonyms include Vinca rosea , Ammocallis rosea, and Lochnera rosea; other English names occasionally used include Cape Periwinkle, Rose Periwinkle, Rosy Periwinkle, and "Old-maid".In the wild, it is an endangered...
(Madagascar periwinkle), formerly Vinca rosea and hence its name. It is a mitotic inhibitor
Mitotic inhibitor
A mitotic inhibitor is a drug that inhibits mitosis, or cell division. These drugs disrupt microtubules, which are structures that pull the cell apart when it divides...
, and is used in cancer chemotherapy
Chemotherapy
Chemotherapy is the treatment of cancer with an antineoplastic drug or with a combination of such drugs into a standardized treatment regimen....
.
Tubulin
Tubulin
Tubulin is one of several members of a small family of globular proteins. The most common members of the tubulin family are α-tubulin and β-tubulin, the proteins that make up microtubules. Each has a molecular weight of approximately 55 kiloDaltons. Microtubules are assembled from dimers of α- and...
is a structural protein that polymer
Polymer
A polymer is a large molecule composed of repeating structural units. These subunits are typically connected by covalent chemical bonds...
izes to microtubule
Microtubule
Microtubules are a component of the cytoskeleton. These rope-like polymers of tubulin can grow as long as 25 micrometers and are highly dynamic. The outer diameter of microtubule is about 25 nm. Microtubules are important for maintaining cell structure, providing platforms for intracellular...
s. The cell cytoskeleton
Cytoskeleton
The cytoskeleton is a cellular "scaffolding" or "skeleton" contained within a cell's cytoplasm and is made out of protein. The cytoskeleton is present in all cells; it was once thought to be unique to eukaryotes, but recent research has identified the prokaryotic cytoskeleton...
and mitotic spindle
Mitotic spindle
In cell biology, the spindle fibers are the structure that separates the chromosomes into the daughter cells during cell division. It is part of the cytoskeleton in eukaryotic cells...
, among other things, are made of microtubules. Vincristine binds to tubulin dimers, inhibiting assembly of microtubule structures.

how vincristine causes damages to the miotic spindle?
More
x