Encyclopedia
Vicente Blasco Ibáñez was a Spanish realist
Spanish Realist literature
Spanish Realist literature is the literature written in Spain during the second half of the 19th century, following the Realist movement which predominated in Europe....
novel
Novel
A novel is a book of long narrative in literary prose. The genre has historical roots both in the fields of the medieval and early modern romance and in the tradition of the novella. The latter supplied the present generic term in the late 18th century....
ist writing in Spanish, a screenwriter
Screenwriter
Screenwriters or scriptwriters or scenario writers are people who write/create the short or feature-length screenplays from which mass media such as films, television programs, Comics or video games are based.-Profession:...
and occasional film director
Film director
A film director is a person who directs the actors and film crew in filmmaking. They control a film's artistic and dramatic nathan roach, while guiding the technical crew and actors.-Responsibilities:...
.

Born in Valencia
Valencia (city in Spain)
Valencia or València is the capital and most populous city of the autonomous community of Valencia and the third largest city in Spain, with a population of 809,267 in 2010. It is the 15th-most populous municipality in the European Union...
, today he is best known in the English-speaking world for his World War I novel Los cuatro jinetes del apocalipsis. Filmed in 1921 as The Four Horsemen of the Apocalypse
The Four Horsemen of the Apocalypse (film)
The Four Horsemen of the Apocalypse is a 1921 silent movie produced by Metro Pictures Corporation, adapted by June Mathis, directed by Rex Ingram and starring Rudolph Valentino, Pomeroy Cannon, Josef Swickard, Wallace Beery, and Alice Terry...
, it was filmed again in 1962, reset in World War II. However, in his time he was a best-selling author inside and outside of Spain, and also known for his controversial political activities. While Sangre y arena (Blood and Sand) and Los cuatro jinetes del apocalipsis are his most popular novels, particularly outside of Spain, his Valencian novels such as La barraca and Cañas y barro are the ones most valued by scholars.

His life, it can be said, tells a more interesting story than his novels. He was a militant Republican
First Spanish Republic
The First Spanish Republic was the political regime that existed in Spain between the parliamentary proclamation on 11 February 1873 and 29 December 1874 when General Arsenio Martínez-Campos's pronunciamento marked the beginning of the Bourbon Restoration in Spain...
partisan in his youth and founded a newspaper, El Pueblo (translated as either The Town or The People) in his hometown. The newspaper aroused so much controversy that it was brought to court many times and censored. He made many enemies and was shot and almost killed in one dispute. The bullet was caught in the clasp of his belt. He had several stormy love affairs.

He volunteered as the proofreader for the novel Noli Me Tangere
Noli Me Tangere (novel)
Noli Me Tangere is a novel by Filipino polymath José Rizal and first published in 1887 in Berlin, Germany. Early English translations used titles like An Eagle Flight and The Social Cancer, but more recent translations have been published using the original Latin title.Though originally written in...
, in which the Filipino patriot José Rizal
José Rizal
José Protacio Rizal Mercado y Alonso Realonda , was a Filipino polymath, patriot and the most prominent advocate for reform in the Philippines during the Spanish colonial era. He is regarded as the foremost Filipino patriot and is listed as one of the national heroes of the Philippines by...
expressed his contempt of the Spanish colonization of the Philippines.
He travelled to Argentina in 1909 where two new cities, Nueva Valencia and Cervantes, were created. He gave conferences on historical events and Spanish literature
Spanish literature
Spanish literature generally refers to literature written in the Spanish language within the territory that presently constitutes the state of Spain...
. Tired and disgusted with government failures and inaction, Vicente Blasco Ibáñez moved to Paris at the beginning of World War I.

He was a supporter of the Allies in World War I.

His themes include his native Valencia.

He died in Menton
Menton
Menton is a commune in the Alpes-Maritimes department in the Provence-Alpes-Côte d'Azur region in southeastern France.Situated on the French Riviera, along the Franco-Italian border, it is nicknamed la perle de la France ....
, France in 1928, the day before his 61st birthday, in the residence of Fontana Rosa
Fontana Rosa
Fontana Rosa is a Belle Époque French garden placed in Menton .The Spanish writer Vicente Blasco Ibáñez began to build it from 1922 on, and he established there with his second wife, Elena, and died in 1928....
(also named the House of Writers, dedicated to Miguel de Cervantes
Miguel de Cervantes
Miguel de Cervantes Saavedra was a Spanish novelist, poet, and playwright. His magnum opus, Don Quixote, considered the first modern novel, is a classic of Western literature, and is regarded amongst the best works of fiction ever written...
, Charles Dickens
Charles Dickens
Charles John Huffam Dickens was an English novelist, generally considered the greatest of the Victorian period. Dickens enjoyed a wider popularity and fame than had any previous author during his lifetime, and he remains popular, having been responsible for some of English literature's most iconic...
and William Shakespeare
William Shakespeare
William Shakespeare was an English poet and playwright, widely regarded as the greatest writer in the English language and the world's pre-eminent dramatist. He is often called England's national poet and the "Bard of Avon"...
) that he built. 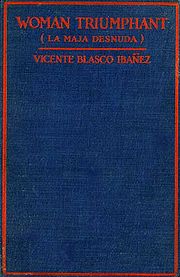