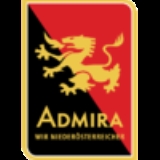 Encyclopedia
FC Admira Wacker Mödling (official: FC Trenkwalder
Trenkwalder
Trenkwalder International AG is an international personnel service provider and market leader in Austria, Hungary and Slovakia. In total the Trenkwalder-group generated a turnover of 1,000 mio...
Admira Wacker Mödling; short: Admira) is an Austrian
Austria
Austria , officially the Republic of Austria , is a landlocked country of roughly 8.4 million people in Central Europe. It is bordered by the Czech Republic and Germany to the north, Slovakia and Hungary to the east, Slovenia and Italy to the south, and Switzerland and Liechtenstein to the...
football club from Mödling
Mödling
Mödling is the capital of the Austrian district of the same name located approximately 14 km south of Vienna.The settlement dates back to the Neolithic. In medieval times, the town was the residence of a branch of the Babenberger family, as a result of which it received the nickname...
. The club was originally formed in 1905 as SK Admira Vienna in the Austrian capital. Mergers in 1971 with SC Wacker Vienna, in 1997 with VfB Mödling and in 2008 with SK Schwadorf
SK Schwadorf
Sportklub Schwadorf was an Austrian football club, based in Schwadorf. They were last playing in the First League. The club was known as Trenkwalder Sportklub Schwadorf for sponsorship reasons — Trenkwalder being the company of chairman Richard Trenkwalder...
led to its current name.

SK Admira Vienna was formed in the Vienna
Vienna
Vienna is the capital and largest city of the Republic of Austria and one of the nine states of Austria. Vienna is Austria's primary city, with a population of about 1.723 million , and is by far the largest city in Austria, as well as its cultural, economic, and political centre...
district of Jedlesee as a merger between two football clubs named Burschenschaft Einigkeit and Sportklub Vindobona in 1905. After World War I
World War I
World War I , which was predominantly called the World War or the Great War from its occurrence until 1939, and the First World War or World War I thereafter, was a major war centred in Europe that began on 28 July 1914 and lasted until 11 November 1918...
in 1919, Admira were promoted to the first tier of the Austrian league system for the time in their history. The club soon became one of the more successful teams during the inter-war period, capturing seven Austrian national championship and three Austrian Cup
Austrian Cup
The Austrian Cup, in German: ÖFB-Cup is an annual football competition held by the Austrian Football Association, the ÖFB.It has been held since 1919, with the exception of the time of the Anschluss between 1939 and 1945 and the period between 1950 and 1958 when the competition was deemed of...
titles. Several Admira players were also regulars in the Austrian national football team at this time.

After the Anschluss
Anschluss
The Anschluss , also known as the ', was the occupation and annexation of Austria into Nazi Germany in 1938....
in 1938, Admira played for several seasons in the Gauliga Ostmark
Gauliga Ostmark
The Gauliga Ostmark, renamed Gauliga Donau-Alpenland in 1941, was the highest football league in Austria after its annexation by Germany in 1938...
, one of the top-flight regional leagues created through the reorganization of German football under the Third Reich. The win of the 1938–39 Gauliga Ostmark brought the qualification for the 1939 German football championship
1939 German football championship
-Group 1:-Group 2-A:-Group 2-B:-Group 3:-Group 4:-Semifinals:*FC Schalke 04 3-3 ; 2-0 Dresdner SC*Admira Wien 4-1 Hamburger SV-References:*...
, in which Admira made their way to the final against Schalke 04
FC Schalke 04
Fußball-Club Gelsenkirchen-Schalke 04, commonly known as simply FC Schalke 04 or Schalke , is a German, association-football club originally from the Schalke district of Gelsenkirchen, North Rhine-Westphalia. Schalke has long been one of the most popular football teams in Germany, even though major...
, which was the dominant side in German football of the era. The match, however, was overwhelmingly lost by a score of 0–9, and marked also the last time of larger success for the Vienna side before the end of World War II
World War II
World War II, or the Second World War , was a global conflict lasting from 1939 to 1945, involving most of the world's nations—including all of the great powers—eventually forming two opposing military alliances: the Allies and the Axis...
.

The post-war period led to a slow but steady decline, which was partially inflicted by the lack of funds to buy more competitive players, and eventually culminated into the first brief relegation from the top tier after forty years in 1960. The club underwent two name changes in that period, playing as ESV Admira Vienna after a merger with railroad sports club ESV Vienna in 1953 before changing to ESV Admira-NÖ Energie Vienna in 1960 due to a sponsorship agreement with regional energy suppliers NEWAG/NIOGAS
EVN Group
EVN Group is an Austrian-based producer and transporter of electricity, one of the largest in Europe having over three million customers in 14 countries. The company also operates in water treatment, natural gas supply and waste management business areas...
. Soon thereafter, Admira (or Admira Energie, as it was called in most media during the time) regained some of its earlier strength, winning the Austrian Cup in 1964 and the Double of league and cup titles in 1966.

The revelation of financial scandals within NEWAG/NIOGAS in the late 1960s led to an abrupt end of the steady flow of funds and brought the club onto the brink of administration, which could narrowly be avoided. Nevertheless, Admira began looking for a merger partner, and particularly targeted Austria Vienna
FK Austria Wien
Fußballklub Austria Wien is an Austrian association football club from the capital city of Vienna. They are considered the most successful club in Austria, having won the highest Austrian Bundesliga 23 times, the Austrian Cup 27 times and the Austrian Supercup 6 times. They also reached the UEFA...
. However, after the creation of Admira-Austria was declined twice, Admira eventually began talks with SC Wacker Vienna, which were successfully concluded in 1971.

Wacker Vienna was formed in 1908 in the Vienna district of Meidling. The club reached the first tier of the Austrian league system for the first time in 1914. Being a mid-table side until the second half of the 1930s, Wacker became a top-team in the 1940s and 1950s, winning the double in 1947 and ending as league runners-up eight more times between 1940 and 1956.

The last decade as a club on its own was affected by the transformation to a bona-fide yo-yo club, with eight straight relegations from or promotions to the Austrian top tier between 1961 and 1968. A fifth relegation in 1971, combined with financial and stadium problems, eventually led to the merger with Admira, forming FC Admira/Wacker Vienna.

VfB Mödling was formed on 17 June 1911 in the Lower Austrian
Lower Austria
Lower Austria is the northeasternmost state of the nine states in Austria. The capital of Lower Austria since 1986 is Sankt Pölten, the most recently designated capital town in Austria. The capital of Lower Austria had formerly been Vienna, even though Vienna is not officially part of Lower Austria...
town of Mödling
Mödling
Mödling is the capital of the Austrian district of the same name located approximately 14 km south of Vienna.The settlement dates back to the Neolithic. In medieval times, the town was the residence of a branch of the Babenberger family, as a result of which it received the nickname...
. Since their foundation, Mödling were playing in the highest Lower Austrian league. With the introduction of an Austria-wide national league in 1949, the club was classified into the second tier. Playing most of its existence in second- and third-tier leagues since then, the club enjoyed three brief stints in the top division during the 1952–53 and 1987–88 seasons as well as between 1992 and 1995 before eventually merging with Admira/Wacker in 1997.

In 1997, after a financial crisis, VFB Mödling and Admira Wacker merged. In 2004 Iran
Iran
Iran , officially the Islamic Republic of Iran , is a country in Southern and Western Asia. The name "Iran" has been in use natively since the Sassanian era and came into use internationally in 1935, before which the country was known to the Western world as Persia...
ian Majid Pishyar
Majid Pishyar
Majid Pishyar is an Iranian businessman. He is CEO of Dubai-based 32 Group and is owner of football clubs Servette FC , S.C. Beira-Mar and previously FC Admira Wacker Mödling .- References :...
purchased the club. His stewardship of the club led to on-field and off-field difficulties. The club was relegated after the 2005-06 season. With further financial trouble, Pishyar sold the club to Richard Trenkwalder in 2008. Trenkwalder made a series of changes to the club, including changing the club's name to FC Trenkwalder Admira. His changes eventually paid off, with the club gaining promotion back to the Austrian first division following the 2010-11 season.