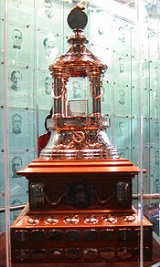 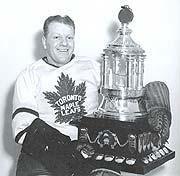 Donated in May 1927, the Trophy was initially to be awarded annually to the 'most valuable' goaltender in the league.

In 1946, the trophy was amended to go to the goaltender(s) of the team allowing the fewest number of goals during the regular season. This criterion was in place until the 1980–81 season. This system often meant the trophy went to the goaltender(s) of the better team rather than the individual, and the best goaltender would have been the player named to the NHL All-Star First Team
NHL All-Star Team
The NHL All-Star Teams were first named at the end of the 1930–31 NHL season, to honor the best performers over the season at each position.Representatives of the Professional Hockey Writers' Association vote for the All-Star Team at the end of the regular season.The career leaders in citations are...
, such as in the 1979-80 season when Don Edwards
Don Edwards
William Donlon Edwards is an American politician of the Democratic Party, formerly a member of the United States House of Representatives from California.-Biography:...
and Bob Sauve
Bob Sauve
Robert F. Sauvé is a retired professional ice hockey goaltender, and currently a player agent.-Playing career:...
shared the Vezina while Tony Esposito
Tony Esposito
For the Italian musician, please see Tony Esposito .Anthony James "Tony O" Esposito is a retired Canadian-American professional ice hockey goaltender, who played in the National Hockey League, most notably for the Chicago Black Hawks. He was one of the pioneers of the now popular butterfly style....
was named to the First Team.

As a result, a change was made to offer the William M. Jennings Trophy
William M. Jennings Trophy
The William M. Jennings Trophy is an annual National Hockey League award given to "the goalkeeper having played a minimum of 25 games for the team with the fewest goals scored against it. Winners are selected based on regular-season play." From 1946 until 1981, the Vezina Trophy had been awarded...
to the goaltender(s) playing for the team with the fewest goals against. Starting with the 1981-82 season, the Vezina Trophy has been voted on by the general managers of the NHL teams to the most outstanding goaltender. Billy Smith
Billy Smith (ice hockey)
William John Smith, better known as Billy Smith, is a retired professional ice hockey goaltender and is best known for winning four Stanley Cups with the New York Islanders and being the first goalie to be credited with a goal....
of the New York Islanders
New York Islanders
The New York Islanders are a professional ice hockey team based in Uniondale, New York. They are members of the Atlantic Division of the Eastern Conference of the National Hockey League...
was the first winner of the Vezina under the current system.

The voting is conducted at the end of the regular season by the 30 general managers of the teams in the National Hockey League
National Hockey League
The National Hockey League is an unincorporated not-for-profit association which operates a major professional ice hockey league of 30 franchised member clubs, of which 7 are currently located in Canada and 23 in the United States...
, and each individual voter ranks their top three candidates on a 5-3-1 points system. Three finalists are named and the trophy is awarded at the NHL Awards ceremony after the playoffs. 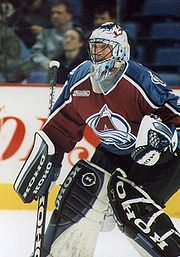 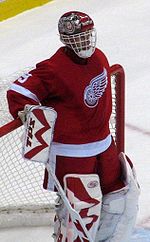 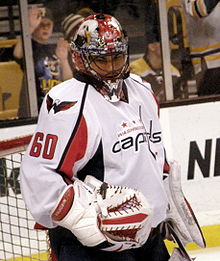 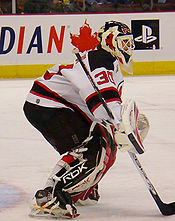 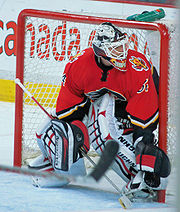 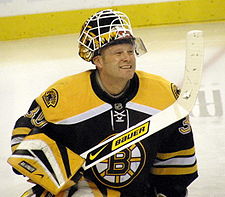 When introduced, the Vezina Trophy was awarded to the most valuable goaltender in the league.
Season

In 1946, the NHL Governors changed the criteria for winning to the team with the fewest goals scored against it during the season. The goalie playing the most games for the team was awarded the Trophy. The conditions were later amended to be given to goaltenders having played 25 games.
Season