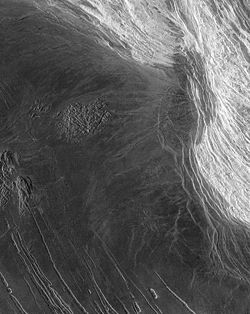 The Venus snow is a brightening of the radar reflection from the surface of Venus
Venus
Venus is the second planet from the Sun, orbiting it every 224.7 Earth days. The planet is named after Venus, the Roman goddess of love and beauty. After the Moon, it is the brightest natural object in the night sky, reaching an apparent magnitude of −4.6, bright enough to cast shadows...
at high elevations. The nature of the "snow" was initially unknown. It could not be water ice
Ice
Ice is water frozen into the solid state. Usually ice is the phase known as ice Ih, which is the most abundant of the varying solid phases on the Earth's surface. It can appear transparent or opaque bluish-white color, depending on the presence of impurities or air inclusions...
, which cannot exist in the extremely hot, dry conditions of the Venusian surface. Possible explanations included loose soil, different rates of weathering at high and low elevations, and chemical deposition at high elevation. In radar images of the planet, smooth surfaces such as lava plains generally appear dark, while rough surfaces such as impact debris appear bright. The composition of the rock also alters the radar return: conductive material, or material with a high dielectric constant
Dielectric constant
The relative permittivity of a material under given conditions reflects the extent to which it concentrates electrostatic lines of flux. In technical terms, it is the ratio of the amount of electrical energy stored in a material by an applied voltage, relative to that stored in a vacuum...
, appears brighter. It was therefore difficult to determine whether the high-altitude areas were different in chemical composition or different in texture from the lowlands.

Data from the radar mapper on the Pioneer Venus
Pioneer Venus project
The Pioneer mission to Venus consisted of two components, launched separately. Pioneer Venus 1 or Pioneer Venus Orbiter was launched in 1978 and studied the planet for more than a decade after orbital insertion in 1978. Pioneer Venus 2 or Pioneer Venus Multiprobe sent four small probes into the...
orbiter suggested an explanation in terms of chemical composition. It was hypothesized that the underlying rock contained iron pyrite or other metallic inclusions that would be very reflective. At the high temperatures found on the surface of Venus, these minerals would gradually evaporate. Faster weathering
Weathering
Weathering is the breaking down of rocks, soils and minerals as well as artificial materials through contact with the Earth's atmosphere, biota and waters...
at high elevation might continually expose new material, causing the highlands to appear brighter than lowlands.

High-resolution radar observations by the Magellan probe
Magellan probe
The Magellan spacecraft, also referred to as the Venus Radar Mapper, was a 1,035-kilogram robotic space probe launched by NASA on May 4, 1989, to map the surface of Venus using Synthetic Aperture Radar and measure the planetary gravity...
by 1995 began to favor the hypothesis that metallic compounds sublimate in lower, warmer altitudes and condense in higher, cooler areas.
Candidates included tellurium, pyrite, and
other metal sulfide
Sulfide
A sulfide is an anion of sulfur in its lowest oxidation state of 2-. Sulfide is also a slightly archaic term for thioethers, a common type of organosulfur compound that are well known for their bad odors.- Properties :...
s.
More recent work has supported the mineral condensate scenario, and identified the "snow" as lead sulfide
Lead sulfide
Lead sulfide is an ionic compound of lead and sulfur, having two possible proportions:*Lead sulfide, the ionic compound containing lead in the +2 oxidation state*Lead sulfide, the ionic compound containing lead in the +4 oxidation state...
and bismuth sulfide precipitated from the atmosphere at altitudes above 2600 m.
The source of this article is wikipedia, the free encyclopedia.  The text of this article is licensed under the GFDL.