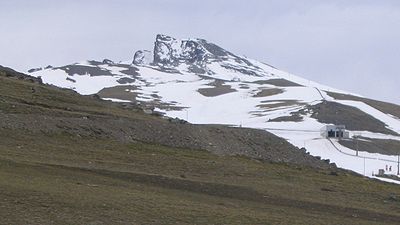 Veleta or Pico del Veleta is the third highest peak of the Iberian peninsula
Iberian Peninsula
The Iberian Peninsula , sometimes called Iberia, is located in the extreme southwest of Europe and includes the modern-day sovereign states of Spain, Portugal and Andorra, as well as the British Overseas Territory of Gibraltar...
and the second highest in the Sierra Nevada
Sierra Nevada (Spain)
The Sierra Nevada is a mountain range in the region of provinces of Granada and Almería in Spain. It contains the highest point of continental Spain, Mulhacén at 3478 m above sea level....
. Its height is given variously as 3394 metres (11,135.2 ft), 3396 metres (11,141.7 ft) and 3398 metres (11,148.3 ft).

The mountain can be seen from the city of Granada
Granada
Granada is a city and the capital of the province of Granada, in the autonomous community of Andalusia, Spain. Granada is located at the foot of the Sierra Nevada mountains, at the confluence of three rivers, the Beiro, the Darro and the Genil. It sits at an elevation of 738 metres above sea...
. Veleta's northern slopes are home to the Sierra Nevada Ski Station
Sierra Nevada Ski Station
The Sierra Nevada Ski Station is a ski resort in the Sierra Nevada mountains in the province Granada in southeastern Spain. The ski area is on the northern slopes of Veleta, the third highest peak in Spain. This is the most southerly ski resort of Europe....
. The access road that takes one to approximately 10 metres below the summit is the highest paved road in Europe across the mountains from Granada to the western Alpujarras
Alpujarras
thumb|250px|A typical Alpujarran village, [[Busquístar]].La Alpujarra is a landlocked historical region in Southern Spain, which stretches south from the Sierra Nevada mountains near Granada in the autonomous community of Andalusia. The western part of the region lies in the province of Granada...
. This road was built after the creation of the Sierra Nevada National Park
Sierra Nevada National Park (Spain)
The Parque Nacional Sierra Nevada is located in Granada and Almería provinces in south-eastern Spain. It was declared a national park on 14 January 1999. It stretches from the Alpujarra to El Marquesado and the Lecrin Valley, covering a total area of 85,883 hectares, making it the largest national...
in 1999., the road has been closed to general traffic beyond Hoya de la Mora, just above the ski station. However, the road is still used by ski station employees, national park rangers, cyclists and walkers, and there is also a microbus service that takes hikers up to Posiciones del Veleta, a viewpoint 3,100 metres above sea level. In summer it is a relatively easy walk up to the summit from there.

The Corral de la Veleta or Corral del Veleta glacier, at 37° N the southernmost glacier
Glacier
A glacier is a large persistent body of ice that forms where the accumulation of snow exceeds its ablation over many years, often centuries. At least 0.1 km² in area and 50 m thick, but often much larger, a glacier slowly deforms and flows due to stresses induced by its weight...
in Europe, disappeared in 1913.