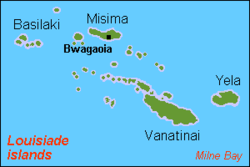 Vanatinai or Tagula is a volcanic island in the south-east of the Louisiade Archipelago
Louisiade Archipelago
The Louisiade Archipelago is a string of ten larger volcanic islands frequently fringed by coral reefs, and 90 smaller coral islands located 200 km southeast of New Guinea, stretching over more than and spread over an ocean area of between the Solomon Sea to the north and the Coral Sea to...
within Milne Bay Province
Milne Bay Province
Milne Bay is a province of Papua New Guinea. Its capital is Alotau. The province covers 14,000 km² of land and 252,990 km² of sea, within the province there are more than 600 islands, about 160 of which are inhabited...
of Papua New Guinea
Papua New Guinea
Papua New Guinea , officially the Independent State of Papua New Guinea, is a country in Oceania, occupying the eastern half of the island of New Guinea and numerous offshore islands...
. The reef
Coral reef
Coral reefs are underwater structures made from calcium carbonate secreted by corals. Coral reefs are colonies of tiny living animals found in marine waters that contain few nutrients. Most coral reefs are built from stony corals, which in turn consist of polyps that cluster in groups. The polyps...
fringed island is approximately 360 kilometres (223.7 mi) south-east of New Guinea
New Guinea
New Guinea is the world's second largest island, after Greenland, covering a land area of 786,000 km2. Located in the southwest Pacific Ocean, it lies geographically to the east of the Malay Archipelago, with which it is sometimes included as part of a greater Indo-Australian Archipelago...
. With an area of 865.7 square kilometre, it is the largest island of the archipelago. Vanatinai town, the main settlement, is located on the northwest coast. The population of the island was about 2,300 in 1978. The principal export is copra
Copra
Copra is the dried meat, or kernel, of the coconut. Coconut oil extracted from it has made copra an important agricultural commodity for many coconut-producing countries. It also yields coconut cake which is mainly used as feed for livestock.-Production:...
.

The island is 63 kilometres (39.1 mi) long, stretching northwest-southeast, and up to 13 kilometres (8.1 mi) km wide. A wooded mountain range runs through the length of the island, with the summit, Mount Riu (806 m) near the center. The most important peaks of the range are, from west to east:

The island was the site of a gold rush that peaked in 1889. Gold was found in nearly all of the island's water courses.

Rambuso Creek is a village towards the north eastern end of the island, entry through the reef to the harbour is deep and easy to see during daylight. Many visiting yachts and local trading boats use this protected anchorage. In 2010 the villagers assisted by visiting yachties rebuilt the wharf and causeway. The villagers new slogan is "Rambuso Creek the gateway to Sudest"