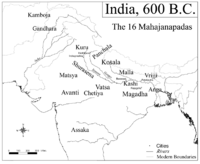 Vajji or Vrijji was one of the principal Mahajanapadas
Mahajanapadas
Mahājanapadas , literally "great realms", were ancient Indian kingdoms or countries...
of ancient India
Ancient India
Ancient India may refer to:* The ancient history of India, which generally includes the ancient history of the Asian Subcontinent, including:*Science and technology in ancient India**Indian mathematics**Astronomy**List of Indian inventions...
. Both the Buddhist text Anguttara Nikaya and the Jaina text Bhagavati Sutra (Saya xv Uddesa I) included Vajji in their lists of solasa (sixteen) Maha-Janapadas. The name of this Mahajanapada was derived from one of its ruling clans, the Vṛjis. This clan is mentioned by Pāṇini, Kautilya and Xuanzang
Xuanzang
Xuanzang was a famous Chinese Buddhist monk, scholar, traveler, and translator who described the interaction between China and India in the early Tang period...
. 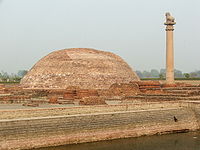 The territory of the Vajji Maha-Janapada was located on the north of the Ganges River and extended up to the Terai region of Nepal
Nepal
Nepal , officially the Federal Democratic Republic of Nepal, is a landlocked sovereign state located in South Asia. It is located in the Himalayas and bordered to the north by the People's Republic of China, and to the south, east, and west by the Republic of India...
. On the west, the Gandak
Gandak
The Kali Gandaki or Gandaki River is one of the major rivers of Nepal and a left bank tributary of the Ganges in India It is also called Krishna Gandaki in Nepal. In Nepal the river is notable for its deep gorge through the Himalayas and its enormous hydroelectric potential...
River was probably the boundary between it and the Malla
Malla (India)
Malla was one of the solasa mahajanapadas of ancient India mentioned in the Anguttara Nikaya. It was named after the ruling clan of the same name. The Mahabharata mentions the territory as the Mallarashtra . The Malla mahajanapada was situated north of Magadha. It was a small mahajanapada...
Maha-Janapada and possibly also separated it with the Kosala
Kosala
Kosala was an ancient Indian region, corresponding roughly in area with the region of Awadh in present day Uttar Pradesh. According to the Buddhist text Anguttara Nikaya and the Jaina text, the Bhagavati Sutra, Kosala was one of the Solasa Mahajanapadas in 6th century BCE and its cultural and...
Maha-Janapada. On the east, its territory was probably extended up to the forests along the banks of the rivers, Koshi
Koshi River
The Kosi River or Koshi —also Saptakoshi for its seven Himalayan tributaries—is a trans-boundary river flowing through Nepal and India. Some of the rivers of the Koshi system, such as the Arun, the Sun Kosi and the Bhote Koshi, originate in the Tibet Autonomous Region of China...
and Mahananda
Mahananda River
The Mahananda River is a trans-boundary river that flows through the Indian states of West Bengal and Bihar, and Bangladesh. Right bank tributary Mechi forms part of Nepal's eastern boundary with West Bengal and the Kankai crosses out of Nepal.-Course:...
. The capital of this Maha-Janapada was Vaishali
Vaishali (ancient city)
Vaiśālī was the capital city of the Licchavi, one of world's first republics, in the Vajjian Confederacy mahajanapada, around the 6th century BC. It was here in 599 BCE the 24th Jain Tirthankara, Bhagwan Mahavira was born and brought up in Kundalagrama in Vaiśālī republic, which make pious &...
. Other important towns and villages were Kundapura or Kundagrama (a suburb of Vaishali), Bhoganagara and Hatthigama.

:)
The rulers of this Maha-Janapada were a confederacy of the eight clans (atthakula) of whom theVrijis, the Lichchavis, the Jnatrikass and the Videhas were the most important. The identities of the other four clans are not certain. However, in a passage of the Sutrakritanga
Sutrakritanga
Sutrakritanga Sutra is the second agama of the 12 main angās of the Jain canons. According to the Svetambara tradition it was written by Gandhara Sudharmasvami in Ardhamagadhi Prakrit...
, the Ugras, the Bhogas, the Kauravas and the Aikshvakas are associated with the Jnatris and Licchavis as the subjects of the same ruler and the members of the same assmebly.

It was known as Vajji Sangha (Vajji confederation), which consisted of several janapadas, gramas (villages), gosthas (groups). The eminent people were chosen from each khandas (districts) to represent on their behalf in Vajji gana parishad (people's council of Vajji). These representatives were called gana mukhyas. The chairman of the council was called Ganapramukh (head of the state), but often he was addressed as the king
Monarch
A monarch is the person who heads a monarchy. This is a form of government in which a state or polity is ruled or controlled by an individual who typically inherits the throne by birth and occasionally rules for life or until abdication...
, though his post was not dynastic. The other executives were Mahabaladhrikrit (equivalent to the minister of internal security), binishchayamatya (chief justice
Chief Justice
The Chief Justice in many countries is the name for the presiding member of a Supreme Court in Commonwealth or other countries with an Anglo-Saxon justice system based on English common law, such as the Supreme Court of Canada, the Constitutional Court of South Africa, the Court of Final Appeal of...
), dandadhikrit (other justices) etc.

Vajji's capital was Vaishali
Vaishali (ancient city)
Vaiśālī was the capital city of the Licchavi, one of world's first republics, in the Vajjian Confederacy mahajanapada, around the 6th century BC. It was here in 599 BCE the 24th Jain Tirthankara, Bhagwan Mahavira was born and brought up in Kundalagrama in Vaiśālī republic, which make pious &...
. It was a prosperous city. In the introductory portion of the Ekapanna Jataka, the Vaishali was described as encompassed by a triple wall with the three gates with watch-towers. The main gosthas were Lichchhavis, Mallas
Malla (India)
Malla was one of the solasa mahajanapadas of ancient India mentioned in the Anguttara Nikaya. It was named after the ruling clan of the same name. The Mahabharata mentions the territory as the Mallarashtra . The Malla mahajanapada was situated north of Magadha. It was a small mahajanapada...
and Śakyas
Shakya
Shakya was an ancient janapada of India in the 1st millennium BCE. In Buddhist texts the Shakyas, the inhabitants of Shakya janapada, are mentioned as a clan of Gotama gotra....
. In around 600 BCE, the Lichchhavis were disciples of Lord Mahavira
Mahavira
Mahāvīra is the name most commonly used to refer to the Indian sage Vardhamāna who established what are today considered to be the central tenets of Jainism. According to Jain tradition, he was the 24th and the last Tirthankara. In Tamil, he is referred to as Arukaṉ or Arukadevan...
, but later they shifted to Buddha Marga (Buddhism
Buddhism
Buddhism is a religion and philosophy encompassing a variety of traditions, beliefs and practices, largely based on teachings attributed to Siddhartha Gautama, commonly known as the Buddha . The Buddha lived and taught in the northeastern Indian subcontinent some time between the 6th and 4th...
). During his lifetime Lord Buddha
Gautama Buddha
Siddhārtha Gautama was a spiritual teacher from the Indian subcontinent, on whose teachings Buddhism was founded. In most Buddhist traditions, he is regarded as the Supreme Buddha Siddhārtha Gautama (Sanskrit: सिद्धार्थ गौतम; Pali: Siddhattha Gotama) was a spiritual teacher from the Indian...
visited Vaishali several times, the vihara where he used to stay in Vaishali was called Kuthagarshala. It was gifted to him by a Ganapramukh, Chetaka.
The source of this article is wikipedia, the free encyclopedia.  The text of this article is licensed under the GFDL.