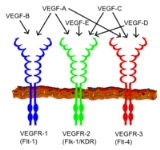 Vascular endothelial growth factor
Vascular endothelial growth factor
Vascular endothelial growth factor is a signal protein produced by cells that stimulates vasculogenesis and angiogenesis. It is part of the system that restores the oxygen supply to tissues when blood circulation is inadequate....
(VEGF) is an important signaling protein
Protein
Proteins are biochemical compounds consisting of one or more polypeptides typically folded into a globular or fibrous form, facilitating a biological function. A polypeptide is a single linear polymer chain of amino acids bonded together by peptide bonds between the carboxyl and amino groups of...
involved in both vasculogenesis
Vasculogenesis
Vasculogenesis is the process of blood vessel formation occurring by a de novo production of endothelial cells.-Process:Though similar to angiogenesis, the two are different in one aspect: The term angiogenesis denotes the formation of new blood vessels from pre-existing ones, whereas...
(the formation of the circulatory system
Circulatory system
The circulatory system is an organ system that passes nutrients , gases, hormones, blood cells, etc...
) and angiogenesis
Angiogenesis
Angiogenesis is the physiological process involving the growth of new blood vessels from pre-existing vessels. Though there has been some debate over terminology, vasculogenesis is the term used for spontaneous blood-vessel formation, and intussusception is the term for the formation of new blood...
(the growth of blood vessels from pre-existing vasculature). As its name implies, VEGF activity is restricted mainly to cells of the vascular endothelium
Endothelium
The endothelium is the thin layer of cells that lines the interior surface of blood vessels, forming an interface between circulating blood in the lumen and the rest of the vessel wall. These cells are called endothelial cells. Endothelial cells line the entire circulatory system, from the heart...
, although it does have effects on a limited number of other cell types (e.g. stimulation monocyte
Monocyte
Monocytes are a type of white blood cell and are part of the innate immune system of vertebrates including all mammals , birds, reptiles, and fish. Monocytes play multiple roles in immune function...
/macrophage
Macrophage
Macrophages are cells produced by the differentiation of monocytes in tissues. Human macrophages are about in diameter. Monocytes and macrophages are phagocytes. Macrophages function in both non-specific defense as well as help initiate specific defense mechanisms of vertebrate animals...
migration). In vitro, VEGF has been shown to stimulate endothelial cell mitogenesis and cell migration
Cell migration
Cell migration is a central process in the development and maintenance of multicellular organisms. Tissue formation during embryonic development, wound healing and immune responses all require the orchestrated movement of cells in particular directions to specific locations...
. VEGF also enhances microvascular permeability and is sometimes referred to as vascular permeability factor. 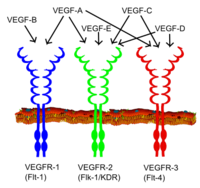 All members of the VEGF family stimulate cellular responses by binding to tyrosine kinase
Tyrosine kinase
A tyrosine kinase is an enzyme that can transfer a phosphate group from ATP to a protein in a cell. It functions as an "on" or "off" switch in many cellular functions....
receptors (the VEGFRs) on the cell surface, causing them to dimerize and become activated through transphosphorylation. The VEGF receptors have an extracellular portion consisting of 7 immunoglobulin-like domains, a single transmembrane spanning region and an intracellular portion containing a split tyrosine-kinase domain.

VEGF-A binds to VEGFR-1 (Flt-1) and VEGFR-2
Kinase insert domain receptor
Kinase insert domain receptor also known as vascular endothelial growth factor receptor 2 is a VEGF receptor. KDR is the human gene encoding it. KDR has also been designated as CD309...
(KDR/Flk-1). VEGFR-2 appears to mediate almost all of the known cellular responses to VEGF. The function of VEGFR-1 is less well defined, although it is thought to modulate VEGFR-2 signaling. Another function of VEGFR-1 is to act as a dummy/decoy receptor, sequestering VEGF from VEGFR-2 binding (this appears to be particularly important during vasculogenesis in the embryo). In fact, an alternatively spliced form of VEGFR-1 (sFlt1) is not a membrane bound protein but is secreted and functions primarily as a decoy. A third receptor has been discovered (VEGFR-3), however, VEGF-A is not a ligand for this receptor. VEGFR-3 mediates lymphangiogenesis in response to VEGF-C and VEGF-D.

Some VEGFR antagonists (inhibitors) (for example lenvatinib, motesanib
Motesanib
Motesanib is an experimental drug candidate. It is an orally administered small molecule antagonist of VEGF receptors, platelet-derived growth factor receptors, and stem cell factor receptors...
) are under investigation for treating various cancers. Pazopanib
Pazopanib
Pazopanib is a potent and selective multi-targeted receptor tyrosine kinase inhibitor of VEGFR-1, VEGFR-2, VEGFR-3, PDGFR-a/β, and c-kit that blocks tumor growth and inhibits angiogenesis. It has been approved for renal cell carcinoma by the U.S. Food and Drug Administration. Pazopanib may also be...
was approved for renal cell carcinoma
Renal cell carcinoma
Renal cell carcinoma is a kidney cancer that originates in the lining of the proximal convoluted tubule, the very small tubes in the kidney that filter the blood and remove waste products. RCC is the most common type of kidney cancer in adults, responsible for approximately 80% of cases...
in 2009.