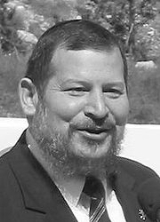 Encyclopedia
Uri Lupolianski was mayor
Mayor
In many countries, a Mayor is the highest ranking officer in the municipal government of a town or a large urban city....
of Jerusalem from 2003 to 2008 and founder of Yad Sarah
Yad Sarah
Yad Sarah is currently the largest Israeli national volunteer organization, aiding disabled, elderly and housebound people and aimed at making home care possible...
.

Born in Haifa
Haifa
Haifa is the largest city in northern Israel, and the third-largest city in the country, with a population of over 268,000. Another 300,000 people live in towns directly adjacent to the city including the cities of the Krayot, as well as, Tirat Carmel, Daliyat al-Karmel and Nesher...
, Israel
Israel
The State of Israel is a parliamentary republic located in the Middle East, along the eastern shore of the Mediterranean Sea...
in 1951, Lupolianski studied at the Yavne School in Haifa and then attended Yeshivat Hanegev. He served in the Israel Defense Forces
Israel Defense Forces
The Israel Defense Forces , commonly known in Israel by the Hebrew acronym Tzahal , are the military forces of the State of Israel. They consist of the ground forces, air force and navy. It is the sole military wing of the Israeli security forces, and has no civilian jurisdiction within Israel...
as a paramedic and worked as a teacher at a religious school in Jerusalem. Lupolianski is married to Michal Lupolianski (Breuer), granddaughter of Rabbi Isaac Breuer
Isaac Breuer
Isaac Breuer was a rabbi in the German Neo-Orthodoxy movement of his maternal grandfather Samson Raphael Hirsch, and was the first president of Agudat Israel Workers.- Biography :...
. They have 12 children.

To attract students to Jerusalem's institutions of higher education, Lupolianski inaugurated the "Lupolianski Package" which offers special tuition and housing subsidies to university students renting apartments in the city center. Hi-tech workers who choose to live and work in Jerusalem are also eligible for a monthly grant to cover part of their living expenses. Lupolianski was accused of preferring Jews for civil service over Arabs, and of basing municipal decisions on his religious views. During his tenure as mayor, Lupolianski clashed with the Israeli gay and lesbian community for trying to stop or change the venue of their annual Gay pride parade
Gay pride parade
Pride parades for the LGBT community are events celebrating lesbian, gay, bisexual and transgender culture. The events also at times serve as demonstrations for legal rights such as same-sex marriage...
in Jerusalem.

In 1976, Lupolianski founded the Yad Sarah
Yad Sarah
Yad Sarah is currently the largest Israeli national volunteer organization, aiding disabled, elderly and housebound people and aimed at making home care possible...
organization to help the elderly and disabled. The organization is named for his grandmother, who died in the Holocaust. It lends out medical equipment and supplies a variety of services to the sick, elderly and lonely. Yad Sarah has a network of 6,000 volunteers working out of 96 branches, and serves all sectors of the population.

Before becoming mayor, Lupolianski won the President's Volunteer Prize; the Knesset
Knesset
The Knesset is the unicameral legislature of Israel, located in Givat Ram, Jerusalem.-Role in Israeli Government :The legislative branch of the Israeli government, the Knesset passes all laws, elects the President and Prime Minister , approves the cabinet, and supervises the work of the government...
Speaker's Award and the Kaplan Prize for Efficiency. In 1994, he accepted the Israel Prize
Israel Prize
The Israel Prize is an award handed out by the State of Israel and is largely regarded as the state's highest honor. It is presented annually, on Israeli Independence Day, in a state ceremony in Jerusalem, in the presence of the President, the Prime Minister, the Knesset chairperson, and the...
on behalf of Yad Sarah.
The source of this article is wikipedia, the free encyclopedia.  The text of this article is licensed under the GFDL.