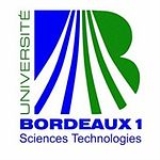 Encyclopedia
The University of Bordeaux 1 is a French university, in the Academy of Bordeaux. Its main campus is in Talence
Talence
Talence is a commune in the Gironde department in Aquitaine in southwestern France.It is the third-largest suburb of the city of Bordeaux, and is adjacent to it on the south side...
.
It has many important laboratories such as
The source of this article is wikipedia, the free encyclopedia.  The text of this article is licensed under the GFDL.