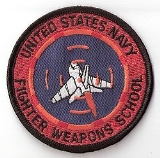 The school was the end result of a study, published in May 1968, by USN Captain Frank Ault
Frank Ault
Captain Frank Ault, USN was a United States Naval officer. He is best remembered for the classified study he led in 1968 that led to the creation of the Navy Fighter Weapons School, or TOPGUN...
who, at the direction of the CNO, researched the failings of the US air to air missiles used in aerial combat in the skies over North Vietnam
North Vietnam
The Democratic Republic of Vietnam , was a communist state that ruled the northern half of Vietnam from 1954 until 1976 following the Geneva Conference and laid claim to all of Vietnam from 1945 to 1954 during the First Indochina War, during which they controlled pockets of territory throughout...
.

What are the basic requirements in a maritime strike fighter aircraft?
More
x