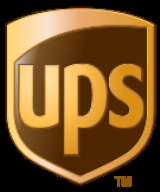 Do the UPS OTR Trucks have automatic ?transmissions

Is there a difference in the marketing concept for Germany, Taiwan, Phillipines and Canada? Do they charge differently for the service?
More
x