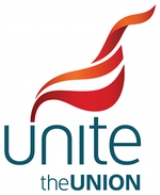 As part of the merger process, a Joint Executive Council (formed of the executives of both the predecessor unions) took office on the vesting day. In March 2008, a new Executive Council for the expanded Union was elected, taking office on 1 May 2008 and having a three year term.The Executive Council was tasked with putting a new Unite rulebook to a postal ballot of members during July 2008. The rule book was accepted by a majority of members and will not be subject to amendment until a Rules Conference is held.

The first reduced unified Unite Executive Council was elected in 2011

The first single General secertary of Unite Len McCluskey was elected in Dec 2010 on a platform of unification and standing for one term of office only.

The UNITE special Rules Conference in 2010 agreed a rule change including a formula for how seats will be allocated on the UNITE Executive Council which takes office in 2011. There are a number of factions within UNITE.

A private presentation given by Unite’s former joint general secretary Tony Woodley showed that membership of the union had declined by 262,740 between 2007 and 2010.

The participants in the 2008 rooftop hunger strike
Hunger strike
A hunger strike is a method of non-violent resistance or pressure in which participants fast as an act of political protest, or to provoke feelings of guilt in others, usually with the objective to achieve a specific goal, such as a policy change. Most hunger strikers will take liquids but not...
at Unite's Transport House building in Belfast
Belfast
Belfast is the capital of and largest city in Northern Ireland. By population, it is the 14th biggest city in the United Kingdom and second biggest on the island of Ireland . It is the seat of the devolved government and legislative Northern Ireland Assembly...
, were formerly shop stewards of the Transport and General Workers Union, now the T&G section of Unite the Union.
The dispute is over legal fees and compensation for an unfair dismissal action against the workers' employer, arising from a 2002 strike at Belfast International Airport
Belfast International Airport
Belfast International Airport is a major airport located northwest of Belfast in Northern Ireland. It was formerly known and is still referred to as Aldergrove Airport, after the village of the same name lying immediately to the west of the airport. Belfast International shares its runways with...
, and the related actions of a full-time union official employee.

On the 9 October 2008 the executive council of Unite announced that there would be an election for the General Secretary (Amicus section), with a timetable of January/February 2009 for the election, the results being announced in March 2009. This election was for a fixed term until December 2010.

The Executive council also postponed the adoption of the new rule book and integration until May 2009.
This action was taken in light of the potential success of a legal challenge to Simpson's extension of tenure by a "single member" of the union. Jerry Hicks
Jerry Hicks (trade unionist)
Jerry Hicks is a British trade unionist. He was the convenor of the Amicus union at Rolls Royce in Bristol, and was dismissed in 2005. An employment tribunal found that he had "probably been dismissed on trade union grounds"....
, a former member of the union's Executive and its General Purposes and Finance Committee and unfairly dismissed convenor of Rolls Royce at Bristol, disclosed at the outset that he was the person behind the challenge. He made the same legal challenge that Simpson deployed successfully on his predecessor Ken Jackson.

Candidates seeking nomination for the election, and their main union positions at the beginning of March 2009, were:

All candidates received sufficient nominations but Laurence Faircloth stood down after nominations closed, recommending that his supporters support Derek Simpson.