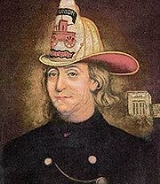 Encyclopedia
Union Fire Company, sometimes called Benjamin Franklin's Bucket Brigade, was a volunteer fire department
Volunteer fire department
See also the Firefighter article and its respective sections regarding VFDs in other countries.A volunteer fire department is a fire department composed of volunteers who perform fire suppression and other related emergency services for a local jurisdiction.The first organized force of...
formed in Philadelphia in 1736 with the assistance of Benjamin Franklin
Benjamin Franklin
Dr. Benjamin Franklin was one of the Founding Fathers of the United States. A noted polymath, Franklin was a leading author, printer, political theorist, politician, postmaster, scientist, musician, inventor, satirist, civic activist, statesman, and diplomat...
. The first fire fighting organization in Philadelphia, though followed within the year by the Fellowship Fire Company. The fire company was formed on 7 December, 1736 after a series of publications in the Pennsylvania Gazette
Pennsylvania Gazette
The Pennsylvania Gazette was one of the United States' most prominent newspapers from 1728, before the time period of the American Revolution, until 1815...
by Franklin and others pointing out the need for more effective handling of fires in Philadelphia and remained active until approximately 1820.


The Union Fire Company was an association for mutual assistance. Each member agreed to furnish, at his own expense, six leather buckets and two stout linen bags, each marked with his name and the name of the company, which he was to bring to every fire. The buckets were for carrying water to extinguish the flames, and the bags were to receive and hold property which was in danger, to save it from risk of theft. The members pledged themselves to repair to any place in danger upon an alarm of fire with their apparatus. Some were to superintend the use of the water, others were to stand at the doors of houses in danger, and to protect the property from theft. On an alarm of fire at night it was agreed that lights should be placed in the windows of houses of members near the fire "in order to prevent confusion, and to enable their friends to give them more speedy and effectual assistance.'

According to Scharf and Westcott, the company was limited to 30 members who met eight times a year and were fined if they were late to or missed a meeting. The company had no president, but a treasurer and a clerk, take in turns from the general membership, who not only managed communications with other members but also inspected the gear. Scharf and Westcott note that this structure was the basis for all fire companies in Philadelphia until the Revolutionary War
American Revolutionary War
The American Revolutionary War , the American War of Independence, or simply the Revolutionary War, began as a war between the Kingdom of Great Britain and thirteen British colonies in North America, and ended in a global war between several European great powers.The war was the result of the...
. The early members of the Company included Isaac Paschal, Samuel Powell
Samuel Powell
For the Continental Congressman and Mayor of Philadelphia, see Samuel Powel.Samuel Powell , was an American politician who represented Tennessee in the United States House of Representatives.-Early life:...
, William Rawle
William Rawle
William Rawle was an American lawyer in Philadelphia, who in 1791 was appointed as United States district attorney in Pennsylvania...
, and Samuel Syme.

With respect to the equipment, Scharf and Westcott note the following:


At this time engines and buckets were the only available apparatus, as pumps were few, and the supply of water scant. The engine of the Union Company, it is believed, was imported from England, as were also those of the other companies formed down to 1768.

The engine of the Union Company was probably kept in a house in Grindstone Alley, which runs north from Market Street to Church Alley, west of Second Street.

In 1752, the Union Fire Company went in with the Hand-in-Hand Fire Company to purchase a fire bell which was placed on Fourth Street where it could be heard throughout the city. By 1791, the Company was in possession of an 80 feet (24.4 m) fire hose
Fire hose
A fire hose is a high-pressure hose used to carry water or other fire retardant to a fire to extinguish it. Outdoors, it is attached either to a fire engine or a fire hydrant. Indoors, it can be permanently attached to a building's standpipe or plumbing system...
, considerably shorter than the 120 feet (36.6 m) hose owned by the Fellowship Fire Company. In addition, in that year, according to Franklin autobiography
The Autobiography of Benjamin Franklin
The Autobiography of Benjamin Franklin is the traditional name for the unfinished record of his own life written by Benjamin Franklin from 1771 to 1790; however, Franklin himself appears to have called the work his Memoirs...
editor John Bigelow, the Company possessed 250 buckets, 13 ladders, two hooks and "no bags."
The source of this article is wikipedia, the free encyclopedia.  The text of this article is licensed under the GFDL.