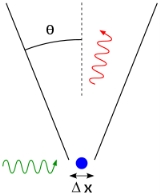 Overview
In quantum mechanics
Quantum mechanics
Quantum mechanics, also known as quantum physics or quantum theory, is a branch of physics providing a mathematical description of much of the dual particle-like and wave-like behavior and interactions of energy and matter. It departs from classical mechanics primarily at the atomic and subatomic...
, the Heisenberg uncertainty principle states a fundamental limit on the accuracy with which certain pairs of physical properties of a particle, such as position
Position
Position may refer to:* Position , a player role within a team* Position , the orientation of a baby prior to birth* Position , a mathematical identification of relative location...
and momentum
Momentum
In classical mechanics, linear momentum or translational momentum is the product of the mass and velocity of an object...
, can be simultaneously known. In other words, the more precisely one property is measured, the less precisely the other can be controlled, determined, or known.

In his Nobel Laureate speech, Max Born
Max Born
Max Born was a German-born physicist and mathematician who was instrumental in the development of quantum mechanics. He also made contributions to solid-state physics and optics and supervised the work of a number of notable physicists in the 1920s and 30s...
said:

To measure space coordinates and instants of time, rigid measuring rods and clocks are required.