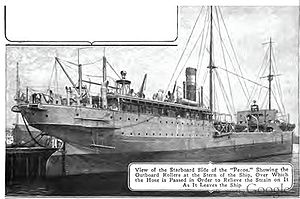 USS Pecos (AO–6) was laid down as Fuel Ship No. 18 on June 2, 1920 by the Navy Yard, Boston, Mass.; reclassified AO–6 on July 17, 1920; launched April 23, 1921; sponsored by Miss Anna S. Hubbard; and commissioned August 25, 1921. During the two decades before the United States
United States
The United States of America is a federal constitutional republic comprising fifty states and a federal district...
entered World War II
World War II
World War II, or the Second World War , was a global conflict lasting from 1939 to 1945, involving most of the world's nations—including all of the great powers—eventually forming two opposing military alliances: the Allies and the Axis...
, Pecos carried fuel to ships of the fleet wherever needed, operating in both Atlantic and Pacific Ocean
Pacific Ocean
The Pacific Ocean is the largest of the Earth's oceanic divisions. It extends from the Arctic in the north to the Southern Ocean in the south, bounded by Asia and Australia in the west, and the Americas in the east.At 165.2 million square kilometres in area, this largest division of the World...
s.

When Japan
Japan
Japan is an island nation in East Asia. Located in the Pacific Ocean, it lies to the east of the Sea of Japan, China, North Korea, South Korea and Russia, stretching from the Sea of Okhotsk in the north to the East China Sea and Taiwan in the south...
attacked Pearl Harbor
Pearl Harbor
Pearl Harbor, known to Hawaiians as Puuloa, is a lagoon harbor on the island of Oahu, Hawaii, west of Honolulu. Much of the harbor and surrounding lands is a United States Navy deep-water naval base. It is also the headquarters of the U.S. Pacific Fleet...
, Pecos was in the Philippines
Philippines
The Philippines , officially known as the Republic of the Philippines , is a country in Southeast Asia in the western Pacific Ocean. To its north across the Luzon Strait lies Taiwan. West across the South China Sea sits Vietnam...
supporting the ships of the Asiatic Fleet. She departed Cavite Navy Yard December 8, 1941 for Borneo
Borneo
Borneo is the third largest island in the world and is located north of Java Island, Indonesia, at the geographic centre of Maritime Southeast Asia....
and reached Balikpapan
Balikpapan
Balikpapan is a seaport city on the eastern coast of the island of Borneo, Indonesia, in the East Kalimantan province, a resource-rich region well known for its timber, mining, and petroleum export products. Two harbors, Semayang and Kariangau , and the Sepinggan International Airport are the main...
on the 14th. After filling up with oil and gasoline, the tanker pushed on to Makassar
Makassar
Makassar, is the provincial capital of South Sulawesi, Indonesia, and the largest city on Sulawesi Island. From 1971 to 1999, the city was named Ujung Pandang, after a precolonial fort in the city, and the two names are often used interchangeably...
in Celebes
Sulawesi
Sulawesi is one of the four larger Sunda Islands of Indonesia and is situated between Borneo and the Maluku Islands. In Indonesia, only Sumatra, Borneo, and Papua are larger in territory, and only Java and Sumatra have larger Indonesian populations.- Etymology :The Portuguese were the first to...
, Netherlands East Indies where she refueled American warships fighting to slow the explosive advance of Japanese forces in the southwest Pacific. She departed Makassar for Darwin
Darwin, Northern Territory
Darwin is the capital city of the Northern Territory, Australia. Situated on the Timor Sea, Darwin has a population of 127,500, making it by far the largest and most populated city in the sparsely populated Northern Territory, but the least populous of all Australia's capital cities...
, Australia
Australia
Australia , officially the Commonwealth of Australia, is a country in the Southern Hemisphere comprising the mainland of the Australian continent, the island of Tasmania, and numerous smaller islands in the Indian and Pacific Oceans. It is the world's sixth-largest country by total area...
, December 22.

She headed for Soerabaja, Java early in 1942 where she fueled Allied ships until departing February 3 after a Japanese air raid there had made that base untenable. Tjilatjap then became the oiler’s base until her cargo fuel tanks were empty. She then got underway late in February toward India
India
India , officially the Republic of India , is a country in South Asia. It is the seventh-largest country by geographical area, the second-most populous country with over 1.2 billion people, and the most populous democracy in the world...
to refill. On the 27th, off Christmas Island
Christmas Island
The Territory of Christmas Island is a territory of Australia in the Indian Ocean. It is located northwest of the Western Australian city of Perth, south of the Indonesian capital, Jakarta, and ENE of the Cocos Islands....
, when the oiler was about to take survivors of Langley
USS Langley (CV-1)
USS Langley was the United States Navy's first aircraft carrier, converted in 1920 from the collier USS Jupiter , and also the U.S. Navy's first electrically propelled ship...
from destroyers Whipple
USS Whipple (DD-217)
USS Whipple , a Clemson-class destroyer was the second ship of the United States Navy named in honor of Captain Abraham Whipple , who served in the Continental Navy....
and Edsall
USS Edsall (DD-219)
USS Edsall , named for Seaman Norman Eckley Edsall , was a Clemson-class destroyer of the United States Navy....
, land based planes attacked the three ships. After fighting off the raiders, the American ships steamed south out of range and completed the transfer March 1.

At noon that day, planes from Japanese carrier Soryu
Japanese aircraft carrier Soryu
was an aircraft carrier of the Imperial Japanese Navy. During the Second World War, she took part in the attack on Pearl Harbor, Wake Island, Port Darwin and raids in the Indian Ocean before being sunk at the Battle of Midway.-Design:...
attacked Pecos and struck again an hour later. Finally at midafternoon, a third strike sent the veteran oiler to the bottom. Executive Officer Lt. Commander Lawrence J. McPeake (Anapolis Class of 1924-Posthumously promoted to Commander after the war) was posthumously awarded the Silver Star for valor for his actions aboard the USS Pecos. After the order to abandon ship was given by the ship's Captain (Commander Abernethy-was awarded the Navy Cross for his skillful maneuvering, defense of the ship, damage control operations, cool leadership, and command of the stricken vessel during the engagement), Lt. Commander McPeake was seen engaging Japanese warplanes (Aichi D3A1 "Val" dive bomber
Aichi D3A
The , Allied reporting name "Val") was a World War II carrier-borne dive bomber of the Imperial Japanese Navy . It was the primary dive bomber in the Imperial Japanese Navy, and participated in almost all actions, including Pearl Harbor....
s) which were machine-gunning and strafing survivors in the sea, using a primitive deck-mounted .50 caliber machine gun. At least one of the Vals was confirmed as being shot down and destroyed, with another aircraft listed as a probable kill. By some crewmembers' accounts, he was reported to have made it off of the ship after it went down. Others reported him last being seen manning the machine gun. In fact, he did swim away from the vessel as it was going down with one other officer from the crew. However, his body was never recovered and he was eventually listed as Killed In Action after the War. A bridge in New Hampshire was named in honor of him, and a plaque on a building at the U.S. Naval Academy is inscribed with his name. Several members of her surviving crewmen thought that the Navy Cross should have been awarded to the Executive Officer, who by some accounts, went down fighting with his ship. Although quite heroic, McPeake's actions were by no means solitary. Several officers and men were to be commended for the heroism in fighting the dive bombers, tending to their critically wounded shipmates while under intense enemy fire, and performing superhuman feats fighting the fires and trying to save their doomed ship. After Pecos was sunk, the USS Whipple raced to the scene and rescued 232 survivors. Many of the survivors, although visible by crew members of Whipple, were unable to be picked up and were abandoned at sea, due to the detection of what was thought to be two enemy submarines in the area at extremely close range.