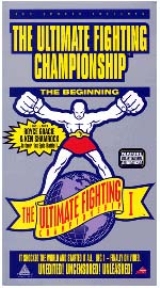 Overview
The Ultimate Fighting Championship (later renamed UFC 1: The Beginning) was the first mixed martial arts
Mixed martial arts
Mixed Martial Arts is a full contact combat sport that allows the use of both striking and grappling techniques, both standing and on the ground, including boxing, wrestling, Brazilian jiu-jitsu, muay Thai, kickboxing, karate, judo and other styles. The roots of modern mixed martial arts can be...
event by the Ultimate Fighting Championship (UFC)
Ultimate Fighting Championship
The Ultimate Fighting Championship is the largest mixed martial arts promotion company in the world that hosts most of the top-ranked fighters in the sport...
, held at the McNichols Sports Arena
McNichols Sports Arena
McNichols Sports Arena was an indoor arena, in Denver, Colorado, USA, adjacent to Mile High Stadium. Completed in 1975, at a cost of $10 million, it seated 16,061, for hockey games, 17,171, for basketball games and contained 27 luxury suites, which were installed as part of the 1986 renovation. It...
in Denver, Colorado
Colorado
Colorado is a U.S. state that encompasses much of the Rocky Mountains as well as the northeastern portion of the Colorado Plateau and the western edge of the Great Plains...
, on November 12, 1993. The event was broadcast live on pay-per-view
Pay-per-view
Pay-per-view provides a service by which a television audience can purchase events to view via private telecast. The broadcaster shows the event at the same time to everyone ordering it...
and later released on home video
Home video
Home video is a blanket term used for pre-recorded media that is either sold or rented/hired for home cinema entertainment. The term originates from the VHS/Betamax era but has carried over into current optical disc formats like DVD and Blu-ray Disc and, to a lesser extent, into methods of digital...
.
UFC 1 used an eight-man tournament
Tournament
A tournament is a competition involving a relatively large number of competitors, all participating in a sport or game. More specifically, the term may be used in either of two overlapping senses:...
format, with the winner receiving $50,000. The tournament had no weight classes and consisted of single-round fights to the finish.

On the poster for UFC 1, along the sides are written the names of fighters. What is written under each of the names of the fighters?
More
x