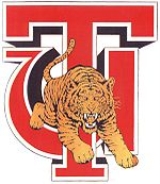 Overview
Tuskegee University is a private
Private university
Private universities are universities not operated by governments, although many receive public subsidies, especially in the form of tax breaks and public student loans and grants. Depending on their location, private universities may be subject to government regulation. Private universities are...
, historically black university
Historically Black Colleges and Universities
Historically black colleges and universities are institutions of higher education in the United States that were established before 1964 with the intention of serving the black community....
located in Tuskegee
Tuskegee, Alabama
Tuskegee is a city in Macon County, Alabama, United States. At the 2000 census the population was 11,846 and is designated a Micropolitan Statistical Area. Tuskegee has been an important site in various stages of African American history....
, Alabama
Alabama
Alabama is a state located in the southeastern region of the United States. It is bordered by Tennessee to the north, Georgia to the east, Florida and the Gulf of Mexico to the south, and Mississippi to the west. Alabama ranks 30th in total land area and ranks second in the size of its inland...
, United States
United States
The United States of America is a federal constitutional republic comprising fifty states and a federal district...
. It is a member school of the Thurgood Marshall Scholarship Fund
Thurgood Marshall Scholarship Fund
The Thurgood Marshall College Fund , named for the U.S. Supreme Court's first African-American Justice, was established in 1987. TMCF supports and represents nearly 300,000 students attending 47-member schools, which include public Historically Black Colleges & Universities and Predominantly Black...
. The campus has been designated as the Tuskegee Institute National Historic Site, a National Historic Landmark
National Historic Landmark
A National Historic Landmark is a building, site, structure, object, or district, that is officially recognized by the United States government for its historical significance...
.
Tuskegee University offers 34 bachelor's degree programs, 12 master's degree programs, a 5-year accredited professional degree program in architecture, 2 doctoral degree programs, and the Doctor of Veterinary Medicine.

What does a student have to make on ACT/SAT to be admitted?
More
x