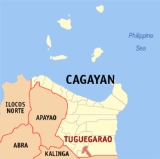 Overview
Tuguegarao City is the city capital of Cagayan, Philippines
Philippines
The Philippines , officially known as the Republic of the Philippines , is a country in Southeast Asia in the western Pacific Ocean. To its north across the Luzon Strait lies Taiwan. West across the South China Sea sits Vietnam...
and the regional capital of Region 02 (Cagayan Valley Region). Tuguegarao is the economic center of the Cagayan Valley Region; it is located on a peninsula in the Cagayan Valley
Cagayan Valley
Cagayan Valley is a region of the Philippines, also designated as Region II or Region 02. It is composed of five provinces, namely: Batanes, Cagayan, Isabela, Nueva Vizcaya, and Quirino...
. It is sheltered by the Sierra Madre
Sierra Madre (Philippines)
The Sierra Madre is a mountain range in The Philippines. It is located along the north-eastern coast of Luzon Island, running north/south. Quezon National Forest Park is situated in the range.-Geography:...
Mountains in the East; Cordillera
Cordillera
A cordillera is an extensive chain of mountains or mountain ranges, that runs along a coastline . It comes from the Spanish word cordilla, which is a diminutive of cuerda, or "cord"...
s in the West; and, the Caraballo Mountains in the South. It grew on the banks of the Cagayan River
Cagayan River
The Cagayan River is the longest and largest river in the Philippine Archipelago. It is located in the Cagayan Valley region in northeastern part of Luzon island and traverses the provinces of Nueva Vizcaya, Quirino, Isabela and Cagayan.-Topography:...
and the Pinacanauan River
Pinacanauan River
Pinacanauan River is a river of the Philippines. It is a tributary of the Cagayan River....
, near the southern border of the province.