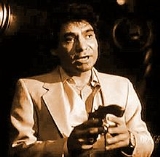 Encyclopedia
Trinidad Silva, Jr. was an American actor who played small supporting roles in a number of films of the 1980s. His television work includes the role of Jesus Martinez on the television series Hill Street Blues
Hill Street Blues
Hill Street Blues is an American serial police drama that was first aired on NBC in 1981 and ran for 146 episodes on primetime into 1987. Chronicling the lives of the staff of a single police precinct in an unnamed American city, the show received critical acclaim and its production innovations ...
.

Silva was born in Mission, Texas
Mission, Texas
Mission is a city in Hidalgo County, Texas, United States. The population was 77,058 at the 2010 census Mission is part of the McAllen–Edinburg–Mission and Reynosa–McAllen metropolitan areas.-Geography:Mission is located at ....
. He died in a car accident involving a collision with a drunken driver in Whittier, California
Whittier, California
Whittier is a city in Los Angeles County, California about southeast of Los Angeles. The city had a population of 85,331 at the 2010 census, up from 83,680 as of the 2000 census, and encompasses 14.7 square miles . Like nearby Montebello, the city constitutes part of the Gateway Cities...
while filming the "Weird Al" Yankovic
"Weird Al" Yankovic
Alfred Matthew "Weird Al" Yankovic is an American singer-songwriter, music producer, accordionist, actor, comedian, writer, satirist, and parodist. Yankovic is known for his humorous songs that make light of popular culture and that often parody specific songs by contemporary musical acts...
film UHF
UHF (film)
UHF is a 1989 American comedy film starring "Weird Al" Yankovic, David Bowe, Fran Drescher, Victoria Jackson, Kevin McCarthy, Michael Richards, Gedde Watanabe, Billy Barty, Anthony Geary, Emo Philips and Trinidad Silva, in whose memory the film is dedicated.The title refers to Ultra High Frequency...
, parts of which had to be rewritten since he hadn't finished filming his part. The film was dedicated to his memory. Silva is buried at the San Fernando Mission Cemetery
San Fernando Mission Cemetery
The San Fernando Mission Cemetery is a Catholic cemetery located at 11160 Stranwood Avenue in the Mission Hills community of the San Fernando Valley of Los Angeles, California, near the San Fernando Mission....
in Mission Hills, Los Angeles, California
Mission Hills, Los Angeles, California
Mission Hills is a suburban community in the San Fernando Valley region of the city of Los Angeles, California.It is located near the northern junction of the Golden State Freeway and the San Diego Freeway . The Ronald Reagan Freeway bisects the neighborhood. Mission Hills is the northern...
.

Silva was not a relative of Henry Silva; this is a popular misconception.