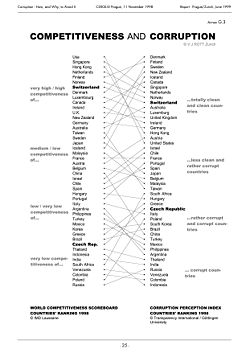 Transparency International (TI) is a non-governmental organization that monitors and publicizes corporate
Corporate crime
In criminology, corporate crime refers to crimes committed either by a corporation , or by individuals acting on behalf of a corporation or other business entity...
and political corruption
Political corruption
Political corruption is the use of legislated powers by government officials for illegitimate private gain. Misuse of government power for other purposes, such as repression of political opponents and general police brutality, is not considered political corruption. Neither are illegal acts by...
in international development. It publishes an annual Corruption Perceptions Index
Corruption Perceptions Index
Since 1995, Transparency International publishes the Corruption Perceptions Index annually ranking countries "by their perceived levels of corruption, as determined by expert assessments and opinion surveys." The CPI generally defines corruption as "the misuse of public power for private...
, a comparative listing of corruption worldwide. The headquarters is located in Berlin
Berlin
Berlin is the capital city of Germany and is one of the 16 states of Germany. With a population of 3.45 million people, Berlin is Germany's largest city. It is the second most populous city proper and the seventh most populous urban area in the European Union...
, Germany
Germany
Germany , officially the Federal Republic of Germany , is a federal parliamentary republic in Europe. The country consists of 16 states while the capital and largest city is Berlin. Germany covers an area of 357,021 km2 and has a largely temperate seasonal climate...
but operates through more than 70 national chapters.

Transparency International was founded in May 1993 through the initiative of Peter Eigen
Peter Eigen
Peter Eigen founded the Advisory Council of Transparency International , a non-governmental organization promoting transparency and accountability in international development since 1993...
, a former regional director for the World Bank
World Bank
The World Bank is an international financial institution that provides loans to developing countries for capital programmes.The World Bank's official goal is the reduction of poverty...
. Founding board members included Eigen, Hansjörg Elshorst, Joe Githongo, Fritz Heimann, Michael Hershman, Kamal Hossain
Kamal Hossain
Dr. Kamal Hossain , born on 20 April 1937, is a notable Bangladeshi politician, statesman and lawyer. He is credited as being one of the principal authors of the Constitution of Bangladesh.- Education :...
, Dolores L. Español, George Moody Stuart, Jerry Parfitt, Jeremy Pope
Jeremy Pope
Jeremy Pope, ONZM is a New Zealand activist and writer. He co-founded in 1993 and later Tiri in 2003. Tiri is a Maori word which means lifting the taboos for the protection of society....
and Frank Vogl. Eigen acted as Chairman and Pope was Managing Director.

In 1995, Transparency International developed the Corruption Perceptions Index (CPI). The CPI ranked nations on the prevalence of corruption within each country, based upon surveys of business people. The CPI was subsequently published annually. It was criticized for poor methodology and unfair treatment of developing nations, while also being praised for highlighting corruption and embarrassing governments.

"Transparency International is the global civil society organization leading the fight against corruption. It brings people together in a powerful worldwide coalition to end the devastating impact of corruption on men, women and children around the world. TI's mission is to create change towards a world free of corruption."

Transparency International's biggest success has been to put the topic of corruption on the world's agenda. International Institutions such as the World Bank
World Bank
The World Bank is an international financial institution that provides loans to developing countries for capital programmes.The World Bank's official goal is the reduction of poverty...
and the International Monetary Fund
International Monetary Fund
The International Monetary Fund is an organization of 187 countries, working to foster global monetary cooperation, secure financial stability, facilitate international trade, promote high employment and sustainable economic growth, and reduce poverty around the world...
now view corruption as one of the main obstacles for development, whereas prior to the 1990s this topic was not broadly discussed. Transparency International furthermore played a vital role in the introduction of the United Nations Convention against Corruption
United Nations Convention against Corruption
The United Nations Convention against Corruption is the first legally binding international anti-corruption instrument. In its 8 Chapters and 71 Articles, the UNCAC obliges its States Parties to implement a wide and detailed range of anti-corruption measures affecting their laws, institutions and...
and the OECD Anti-Bribery Convention
OECD Anti-Bribery Convention
The OECD Anti-Bribery Convention is a convention of the OECD aimed at reducing corruption in developing countries by encouraging sanctions against bribery in international business transactions carried out by companies based in the Convention member countries...
.

The Corruption Perceptions Index—besides the World Bank corruption index—is the most commonly used measure for corruption in countries worldwide. To form this index, Transparency International compiles surveys that ask businessmen and analysts, both in and outside the countries they are analyzing, their perceptions of how corrupt a country is. Relying on the number of actual corruption cases would not work since laws and enforcement of laws differ significantly from country to country.

A review of the linkages between countries' competitiveness and the incidence of corruption was initiated at a Transparency International workshop in Prague
Prague
Prague is the capital and largest city of the Czech Republic. Situated in the north-west of the country on the Vltava river, the city is home to about 1.3 million people, while its metropolitan area is estimated to have a population of over 2.3 million...
, November 1998 and picked-up in the International Anti-Corruption Conference three years later.

Mara Faccio (Purdue University, USA) has issued a number of papers on this subject, including a study entitled
“Differences between Politically Connected and Non-Connected Firms: A Cross Country Comparison”