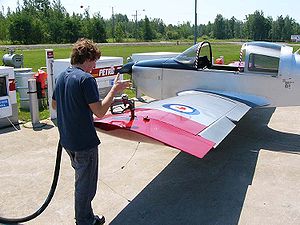 The trailing edge of an aerodynamic surface such as a wing
Wing
A wing is an appendage with a surface that produces lift for flight or propulsion through the atmosphere, or through another gaseous or liquid fluid...
is its rear edge, where the airflow separated by the leading edge
Leading edge
The leading edge is the part of the wing that first contacts the air; alternatively it is the foremost edge of an airfoil section. The first is an aerodynamic definition, the second a structural one....
rejoins. Essential control surfaces are attached here to redirect the air flow and exert a controlling force by changing its momentum. Such control surfaces include ailerons on the wings for roll control, elevators
Elevator (aircraft)
Elevators are flight control surfaces, usually at the rear of an aircraft, which control the aircraft's orientation by changing the pitch of the aircraft, and so also the angle of attack of the wing. In simplified terms, they make the aircraft nose-up or nose-down...
on the tailplane
Tailplane
A tailplane, also known as horizontal stabilizer , is a small lifting surface located on the tail behind the main lifting surfaces of a fixed-wing aircraft as well as other non-fixed wing aircraft such as helicopters and gyroplanes...
controlling pitch
Pitch
Pitch may refer to:* Pitch , a viscous substance produced by plants or formed from petroleum* Pitch * sales pitch** elevator pitch, a very short sales pitch such as that made during an elevator ride* Pitch accent-Music and acoustics:...
and the rudder
Rudder
A rudder is a device used to steer a ship, boat, submarine, hovercraft, aircraft or other conveyance that moves through a medium . On an aircraft the rudder is used primarily to counter adverse yaw and p-factor and is not the primary control used to turn the airplane...
on the fin
Fin
A fin is a surface used for stability and/or to produce lift and thrust or to steer while traveling in water, air, or other fluid media, . The first use of the word was for the limbs of fish, but has been extended to include other animal limbs and man-made devices...
controlling yaw
Yaw
The word yaw can refer to:* Yaw angle, one of the Tait-Bryan angles, describing the heading of a vehicle or machine, and some other related elements:**Yaw system, component responsible for the orientation of a wind turbine towards the wind....
. Elevators and ailerons may be combined as elevons on tailless aircraft
Tailless aircraft
A tailless aircraft traditionally has all its horizontal control surfaces on its main wing surface. It has no horizontal stabilizer - either tailplane or canard foreplane . A 'tailless' type usually still has a vertical stabilising fin and control surface...
.

Other surfaces and equipment that may be attached to the trailing edge of an aircraft's wing or on its control surfaces include: