Overview
The total fertility rate (TFR, sometimes also called the fertility rate, period total fertility rate (PTFR) or total period fertility rate (TPFR)) of a population is the average number of children that would be born to a woman over her lifetime if (1) she were to experience the exact current age-specific fertility
Fertility
Fertility is the natural capability of producing offsprings. As a measure, "fertility rate" is the number of children born per couple, person or population. Fertility differs from fecundity, which is defined as the potential for reproduction...
rates (ASFRs) through her lifetime, and (2) she were to survive from birth through the end of her reproductive life.

what are the weaknesses and limitations to total fertility rate?

the following fertility rates are variously affected by difference in ;age,sex structure current and past fertility and mortality ratios. 1. total fe...

how does the following factors affect total fertility rates;age,sex structure current and past fertility and mortality ratios.
More 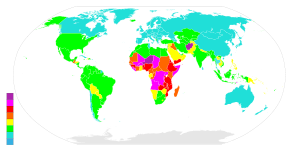 The total fertility rate (TFR, sometimes also called the fertility rate, period total fertility rate (PTFR) or total period fertility rate (TPFR)) of a population is the average number of children that would be born to a woman over her lifetime if (1) she were to experience the exact current age-specific fertility
Fertility
Fertility is the natural capability of producing offsprings. As a measure, "fertility rate" is the number of children born per couple, person or population. Fertility differs from fecundity, which is defined as the potential for reproduction...
rates (ASFRs) through her lifetime, and (2) she were to survive from birth through the end of her reproductive life. It is obtained by summing the single-year age-specific rates at a given time.


The TFR is a synthetic rate, not based on the fertility of any real group of women since this would involve waiting until they had completed childbearing. Nor is it based on counting up the total number of children actually born over their lifetime. Instead, the TFR is based on the age-specific fertility rates of women in their "child-bearing years," which in conventional international statistical usage is ages 15–44 or 15-49.

The TFR is, therefore, a measure of the fertility of an imaginary woman who passes through her reproductive life subject to all the age-specific fertility rates for ages 15–49 that were recorded for a given population in a given year. The TFR represents the average number of children a woman would have were she to fast-forward through all her childbearing years in a single year, under all the age-specific fertility rates for that year. In other words, this rate is the number of children a woman would have if she was subject to prevailing fertility rates at all ages from a single given year, and survives throughout all her childbearing years.

An alternative fertility measure is the net reproduction rate
Net reproduction rate
The net reproduction rate is the average number of daughters that would be born to a female if she passed through her lifetime conforming to the age-specific fertility and mortality rates of a given year. This rate is similar to the gross reproduction rate but takes into account that some females...
(NRR), which measures the number of daughters a woman would have in her lifetime if she were subject to prevailing age-specific fertility and mortality rates in the given year. When the NRR is exactly one, then each generation of women is exactly reproducing itself. The NRR is less widely used than the TFR, and the United Nations stopped reporting NRR data for member nations after 1998. But the NRR is particularly relevant where the number of male babies born is very high – see gender imbalance and sex selection
Sex selection
Sex selection is the attempt to control the sex of the offspring to achieve a desired sex. It can be accomplished in several ways, both pre- and post-implantation of an embryo, as well as at birth...
. This is a significant factor in world population, due to the high level of gender imbalance in the very populous nations of China
China
Chinese civilization may refer to:* China for more general discussion of the country.* Chinese culture* Greater China, the transnational community of ethnic Chinese.* History of China* Sinosphere, the area historically affected by Chinese culture...
and India
India
India , officially the Republic of India , is a country in South Asia. It is the seventh-largest country by geographical area, the second-most populous country with over 1.2 billion people, and the most populous democracy in the world...
. The gross reproduction rate
Gross reproduction rate
The gross reproduction rate is the average number of daughters that would be born to a woman if she survived at least to the age of 45 and conformed to the age-specific fertility rate of a given year...
(GRR), is the same as the NRR, except that - like the TFR - it ignores life expectancy.

The TFR (or TPFR—total period fertility rate) is a better index of fertility than the Crude birth rate (annual number of births per thousand population) because it is independent of the age structure of the population, but it is a poorer estimate of actual completed family size than the total cohort fertility rate, which is obtained by summing the age-specific fertility rates that actually applied to each cohort as they aged through time. In particular, the TFR does not necessarily predict how many children young women now will eventually have, as their fertility rates in years to come may change from those of older women now. However, the TFR is a reasonable summary of current fertility levels. 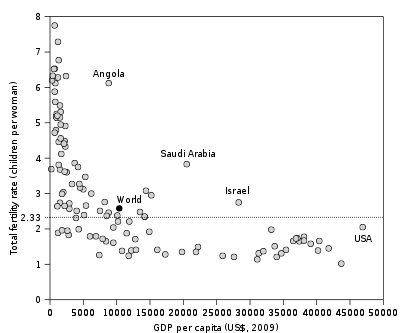 A population that maintained a TFR of 3.8 over an extended period of time without a correspondingly high death or emigration rate would increase rapidly, whereas a population that maintained a TFR of 2.0 over a long time would decline (unless it had a large enough immigration). However, it may take several generations for a change in the total fertility rate to be reflected in birth rate
Birth rate
Crude birth rate is the nativity or childbirths per 1,000 people per year . Another word used interchangeably with "birth rate" is "natality". When the crude birth rate is subtracted from the crude death rate, it reveals the rate of natural increase...
, because the age distribution must reach equilibrium. For example, a population that has recently dropped below replacement-level fertility will continue to grow, because the recent high fertility produced large numbers of young couples who would now be in their child-bearing years. This phenomenon carries forward for several generations and is called population momentum
Population momentum
Population momentum refers to population growth at the national level which would occur even if levels of childbearing immediately declined to replacement level. For countries with above-replacement fertility , population momentum represents natural increase to the population...
or population-lag effect. This time-lag effect is of great importance to the growth rates of human populations.

Developed countries usually have a much lower fertility rate due to greater wealth, education, and urbanization. Mortality rate
Mortality rate
Mortality rate is a measure of the number of deaths in a population, scaled to the size of that population, per unit time...
s are low, birth control
Birth control
Birth control is an umbrella term for several techniques and methods used to prevent fertilization or to interrupt pregnancy at various stages. Birth control techniques and methods include contraception , contragestion and abortion...
is understood and easily accessible, and costs are often deemed very high because of education, clothing, feeding, and social amenities. With wealth, contraception becomes affordable. However, in countries like Iran where contraception was made artificially affordable before the economy accelerated, birth rate also rapidly declined. Further, longer periods of time spent getting higher education often mean women have children later in life. The result is the demographic-economic paradox
Demographic-economic paradox
The demographic-economic paradox is the inverse correlation found between wealth and fertility within and between nations. The higher the degree of education and GDP per capita of a human population, subpopulation or social stratum, the fewer children are born in any industrialized country...
. Female labor participation rate also has substantial negative impact on fertility. However, this effect is neutralized among Nordic or liberalist countries.

In undeveloped countries on the other hand, families desire children for their labour and as caregivers for their parents in old age. Fertility rates are also higher due to the lack of access to contraceptives, generally lower levels of female education
Female education
Female education is a catch-all term for a complex of issues and debates surrounding education for females. It includes areas of gender equality and access to education, and its connection to the alleviation of poverty...
, and lower rates of female employment in industry.

The total fertility rate in the United States after World War II
World War II
World War II, or the Second World War , was a global conflict lasting from 1939 to 1945, involving most of the world's nations—including all of the great powers—eventually forming two opposing military alliances: the Allies and the Axis...
peaked at about 3.8 children per woman in the late 1950s and by 1999 was at 2 children. This means that an imaginary woman (defined in the introduction) who fast-forwarded through her life in the late 1950s would have been expected to have about four children, whereas an imaginary woman who fast-forwarded through her life in 1999 would have been expected to have only about two children in her lifetime. The fertility rate of the total U.S. population is at around the replacement level of about 2.1 children per woman. However, the fertility of the population of the United States is below replacement among those native born, and above replacement among immigrant families, most of whom come to the U.S. from countries with higher fertility than that of the U.S. However, the fertility rates of immigrants to the U.S. have been found to decrease sharply in the second generation, correlating with improved education and income.

The average total fertility rate in Europe has been estimated to be 1.6 children per woman as of 2008.

A systematic review
Systematic review
A systematic review is a literature review focused on a research question that tries to identify, appraise, select and synthesize all high quality research evidence relevant to that question. Systematic reviews of high-quality randomized controlled trials are crucial to evidence-based medicine...
of European fertility rates came to the result that European fertility rates do not seem to decrease significantly by availability of contraception
Contraception
Contraception is the prevention of the fusion of gametes during or after sexual activity. The term contraception is a contraction of contra, which means against, and the word conception, meaning fertilization...
. It pointed out significant factors for low fertility rates to include instability of modern partnerships and value changes. It also stated that government support of assisted reproductive technology
Assisted reproductive technology
Assisted reproductive technology is a general term referring to methods used to achieve pregnancy by artificial or partially artificial means. It is reproductive technology used primarily in infertility treatments. Some forms of ART are also used in fertile couples for genetic reasons...
is beneficial for families, but its effect on total fertility rate is extremely small, and government policies that transfer cash to families for pregnancy and child support also only have small effects on total fertility rate.