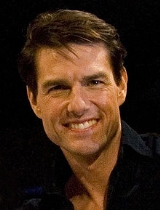 Overview
Thomas Cruise Mapother IV (icon; born July 3, 1962), better known as Tom Cruise, is an American film actor and producer. He has been nominated for three Academy Awards
Academy Awards
An Academy Award, also known as an Oscar, is an accolade bestowed by the American Academy of Motion Picture Arts and Sciences to recognize excellence of professionals in the film industry, including directors, actors, and writers...
and he has won three Golden Globe Award
Golden Globe Award
The Golden Globe Award is an accolade bestowed by the 93 members of the Hollywood Foreign Press Association recognizing excellence in film and television, both domestic and foreign...
s.

Cruise first debuted in a major film in Francis Ford Coppola's The Outsiders
The Outsiders (film)
The Outsiders is a 1983 American drama film directed by Francis Ford Coppola, an adaptation of the novel The Outsiders by S. E. Hinton. The film was released in March 1983...
, released in March 1983. His first leading role was in the film Risky Business
Risky Business
Risky Business is a 1983 American teen comedy-drama film written by Paul Brickman in his directorial debut. It stars Tom Cruise and Rebecca De Mornay. The hit film launched Cruise to stardom.-Plot:...
, which was released in August 1983. After playing the role of a heroic naval pilot in the popular and financially successful 1986 film Top Gun
Top Gun
Top Gun may refer to:* Top Gun is a 1986 film starring Tom Cruise.**Top Gun , soundtrack to the movie**Top Gun , a number of games based on the movie...
, Cruise continued in this vein, playing a secret agent in a series of Mission: Impossible
Mission: Impossible (film)
Mission: Impossible is a 1996 action thriller directed by Brian De Palma and starring Tom Cruise. Following on from the television series of the same name, the plot follows a new agent, Ethan Hunt and his mission to uncover the mole within the CIA who has framed him for the murders of his entire...
action films in the 1990s and 2000s.