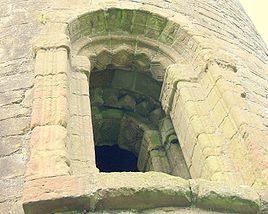 Timahoe is a village in County Laois
County Laois
County Laois is a county in Ireland. It is part of the Midlands Region and is also located in the province of Leinster. It was formerly known as Queen's County until the establishment of the Irish Free State in 1922. The county's name was formerly spelt as Laoighis and Leix. Laois County Council...
, Ireland
Republic of Ireland
Ireland , described as the Republic of Ireland , is a sovereign state in Europe occupying approximately five-sixths of the island of the same name. Its capital is Dublin. Ireland, which had a population of 4.58 million in 2011, is a constitutional republic governed as a parliamentary democracy,...
, 12 km south of Portlaoise on the R426
R426 road
The R426 road is a regional road in Ireland, which runs north-south from the N80 in Portlaoise, County Laois to the N78 in Castlecomer, County Kilkenny.The route is long.-References:* – Department of Transport...
regional road
Regional road
A regional road in Ireland is a class of road not forming a major route , but nevertheless forming a link in the national route network. There are over 11,600 kilometres of regional roads. Regional roads are numbered with three digit route numbers, prefixed by "R" A regional road in Ireland is a...
.

The village of Timahoe is situated in a broad and fertile valley. The houses are built around a large central green, known as the Goosegreen. Community facilities including the church, community hall and recycling area are all located south of the village centre.


The Church, Castle and Round Tower

Saint Mochua
Cronan Mochua
Mo Chua or Crónán mac Bécáin was the founder of Balla, whose diocese was subsequently merged into that of Tuam, Ireland. He is not to be confused with his contemporary Crónán of Roscrea ....
established a monastery here in the 7th century. There are some early historical references to the site – a church was burned here in 919, while there was a murder in the doorway of another church in 1019. It was burned in 1142, and refounded by the O'Mores. There was a monastic community here as late as 1650.

The present fragmentary church has an inserted 15th century chancel arch – now blocked up – leading to the site of the altar.

The Round Tower
Irish round tower
Irish round towers , Cloigthithe – literally "bell house") are early medieval stone towers of a type found mainly in Ireland, with three in Scotland and one on the Isle of Man...
was built in the mid 12th century and is one of the finest in Ireland. Standing 30m high, it is located near the centre of the village. The cap was rebuilt in the 19th century, but the tower is otherwise in its original condition. Its doorway, which is high off the ground and faced the doorway of the church, is elaborately decorated in the Romanesque style
Romanesque architecture
Romanesque architecture is an architectural style of Medieval Europe characterised by semi-circular arches. There is no consensus for the beginning date of the Romanesque architecture, with proposals ranging from the 6th to the 10th century. It developed in the 12th century into the Gothic style,...
. It has four orders (rows of decoration receding into the doorway) two inside and two outside (see photo), separated by a narrow vaulted lobby. The capitals – the heads of the pillars of the doorway – are carved with human heads with intertwining hair.