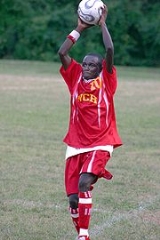 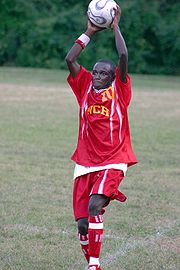 A throw-in is a method of restarting play in a game of Association football.

The throw-in is taken from the point where the ball crossed the touch-line
Touch-line
The touch line is the line on either side of the playing area of a games of rugby league, rugby union and association football . In many other sports it is called a side-line....
. The throw-in is taken by the opponents of the player who last touched the ball when it crossed the touch-line, either on the ground or in the air. Opposing players may stand at any distance from the thrower but no closer than 2m (2yds), so long as they are still on the pitch. A player may take a throw in at a distance further back from the touch-line, and, typically, a referee will tolerate small discrepancies between the position where the ball crossed the touch-line and the position of the throw in.

At the moment of delivering the ball, the thrower must face the field of play, have both feet on the ground on or outside the touch line, and use both hands to deliver the ball from behind and over their head.

The ball becomes in play as soon as it enters the field of play.

A goal may not be scored directly from a throw-in, although if a goalkeeper attempts to stop a throw-in from entering the net and in doing so parries the ball into the net, the resulting goal may be credited to the thrower. A player may not be penalised for being in an offside position direct from a throw-in. 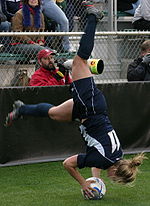 The handspring throw-in, flip throw-in, or somersault throw-in is a type of throw-in, rarely used in competitive games, where the player completes a front handspring
Handspring (gymnastics)
A handspring is an acrobatic move in which a person executes a complete revolution of the body by lunging headfirst from an upright position into a handstand and then pushing off from the floor with the hands so as to leap back to an upright position. Handsprings are performed in various physical...
(somersault
Somersault
A somersault is an acrobatic exercise in which a person does a full 360° flip, moving the feet over the head. A somersault can be performed either forwards, backwards, or sideways and can be executed in the air or on the ground...
) while holding the ball. Instead of landing on the hands during the handspring, the player's weight is momentarily supported entirely by the ball. The handspring throw-in can provide greater ball speed and thus may be used for long throw-ins, somewhat similar to a corner kick. This type of throw-in follows all of the rules that require the player to have both feet on the ground when he/she is releasing the ball, the ball is thrown from behind the head, and the ball is thrown with equal force by both hands. Strong abdominal muscles are required for this throw-in.

Though it was Steve Watson
Steve Watson
Steven Craig "Steve" Watson is a former English footballer, who retired after being released by Sheffield Wednesday on 15 May 2009. As of November 13, 2010, he is the Development Coach at Football League One side Huddersfield Town.-Playing career:Watson began his career with Newcastle United,...
of Newcastle United that was famed for this technique and was able to throw the ball over 30 m, it was an all-American collegiate from LaCrosse, Wisconsin's, Viterbo University V-Hawks, Christian Hricinak, who first developed and introduced the technique in 1985-86. It was so controversial at the time, referees scratched their heads in sheer amazement and disbelief wondering if the throw-in was legal. Some allowed the throw-in and some didn't. Eventually, due to so much controversy and disruption on the field, Christian's coach, Mark Botterill, reluctantly restricted the technique.

One of the noted players who can perform this is Brazilian Leah Lynn Gabriela Fortune, who has been noted to be able to throw over 30 yard with the technique.

If an opposing player fails to respect the required distance before the ball is in play or otherwise unfairly distracts or impedes the thrower he or she may receive a caution (yellow card).

If the thrower fails to deliver the ball as per the required procedure, or delivers it from a point other than where the ball left the field of play, the throw-in is awarded to the opposing team. 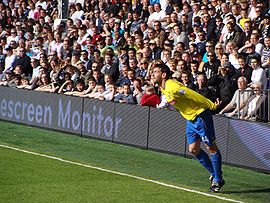 The optimal release angle for attaining maximum distance is about 30 degrees
Degree (angle)
A degree , usually denoted by ° , is a measurement of plane angle, representing 1⁄360 of a full rotation; one degree is equivalent to π/180 radians...
, according to researchers at Brunel University
Brunel University
Brunel University is a public research university located in Uxbridge, London, United Kingdom. The university is named after the Victorian engineer Isambard Kingdom Brunel....
. This angle balances the objectives of maximizing height, which allows the ball more time to travel horizontally, while minimizing air resistance, which slows the ball thus reducing its horizontal distance.

Delivering the ball into the penalty area
Penalty area
The penalty area , is an area of an association football pitch. It is rectangular and extends to each side of the goal and in front of it. Within the penalty area is the penalty spot , which is from the goal line, directly in-line with the centre of the goal...
from a long distance with a throw-in can be a great attacking skill, similar to a corner kick
Corner kick
A corner kick is a method of restarting play in a game of association football. It was first devised in Sheffield under the Sheffield Rules 1867...
or an indirect free kick. This is a difficult distance to reach with a throw-in, and the ability to do so is a valuable skill. In particular, Rory Delap
Rory Delap
Rory John Delap is an English born Irish footballer who plays for Stoke City. He has played eleven times for the Republic of Ireland national football team....
, a midfielder for Stoke City is known for his long-throw abilities having resulted in many goals for Stoke. In fact, the danger factor of Delap's long throw-ins for Stoke have resulted in opponents preferring to put the ball out for a corner rather than for a throw-in, also especially because there is no off-side rule in a throw-in play.


Historical origins of the throw-in

The modern throw-in comes from the nineteenth century English public school football games
English public school football games
During the early modern era students, former students and teachers at English public schools developed and wrote down the first codes of football, most notably the Eton College...
. In these codes of football a variety of methods of returning the ball into play from touch were used. The modern throw-in draws upon various aspects of a number early English school games. For example, returning the ball by throwing it out was part of the Rugby
Rugby football
Rugby football is a style of football named after Rugby School in the United Kingdom. It is seen most prominently in two current sports, rugby league and rugby union.-History:...
and Cheltenham
Cheltenham
Cheltenham , also known as Cheltenham Spa, is a large spa town and borough in Gloucestershire, on the edge of the Cotswolds in the South-West region of England. It is the home of the flagship race of British steeplechase horse racing, the Gold Cup, the main event of the Cheltenham Festival held...
football rules. Like the modern throw-in the direction was not specified. The Sheffield rules
Sheffield Rules
The Sheffield Rules were a code of football devised and played in the English city of Sheffield between 1857 and 1877. They were devised by Nathaniel Creswick and William Prest for use by the newly founded Sheffield Football Club. The rules were subsequently adopted as the official rules of...
instigated the throw in of the ball at right angles by the opposite side to the one that played it into touch. The two handed throw in—called line-out—is part of rugby union football. That the first side reaching the ball must throw it out (at right angles, in this case) was part of the Football Association rules and the Rossall
Rossall School
Rossall School is a British, co-educational, independent school, between Cleveleys and Fleetwood, Lancashire. Rossall was founded in 1844 by St. Vincent Beechey as a sister school to Marlborough College which had been founded the previous year...
rules.