Encyclopedia
Thrinaxodon was a cynodont
Cynodont
Cynodontia or cynodonts are a taxon of therapsids which first appeared in the Late Permian and were eventually distributed throughout all seven continents by the Early Triassic . This clade includes modern mammals and their extinct close relatives. They were one of the most diverse groups of...
, an ermine-sized (30 cm long) therapsid. Pits on the skull
Skull
The skull is a bony structure in the head of many animals that supports the structures of the face and forms a cavity for the brain.The skull is composed of two parts: the cranium and the mandible. A skull without a mandible is only a cranium. Animals that have skulls are called craniates...
suggest that Thrinaxodon may have had whiskers
Vibrissae
Vibrissae , or whiskers, are specialized hairs usually employed for tactile sensation. The term may also refer to the thick hairs found inside human nostrils, but these have no sensorial function and only operate as an airborne particulate barrier...
, and by extension a protective covering of fur
Fur
Fur is a synonym for hair, used more in reference to non-human animals, usually mammals; particularly those with extensives body hair coverage. The term is sometimes used to refer to the body hair of an animal as a complete coat, also known as the "pelage". Fur is also used to refer to animal...
. There are suggestions that it was warm-blooded
Warm-blooded
The term warm-blooded is a colloquial term to describe animal species which have a relatively higher blood temperature, and maintain thermal homeostasis primarily through internal metabolic processes...
. Even so, Thrinaxodon still laid eggs, and there were many reptilian features in its skeleton.

Its remains were found on South Africa
South Africa
The Republic of South Africa is a country in southern Africa. Located at the southern tip of Africa, it is divided into nine provinces, with of coastline on the Atlantic and Indian oceans...
and Antarctica, supporting the notion that the two continents were once joined together. This animal lived during the Triassic
Triassic
The Triassic is a geologic period and system that extends from about 250 to 200 Mya . As the first period of the Mesozoic Era, the Triassic follows the Permian and is followed by the Jurassic. Both the start and end of the Triassic are marked by major extinction events...
Period (248-245 million years ago).

Its name was taken from Greek θρῖναξ "trident
Trident
A trident , also called a trishul or leister or gig, is a three-pronged spear. It is used for spear fishing and was also a military weapon. Tridents are featured widely in mythical, historical and modern culture. The major Hindu god, Shiva the Destroyer and the sea god Poseidon or Neptune are...
, three-pronged fork" and ὀδούϛ ὀδόντ- "tooth", but with a Greek language error: *"Thrinacodon" would have been the grammatically correct form. 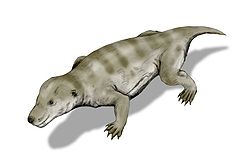 A low-slung, sharp-toothed carnivore
Carnivore
A carnivore meaning 'meat eater' is an organism that derives its energy and nutrient requirements from a diet consisting mainly or exclusively of animal tissue, whether through predation or scavenging...
, Thrinaxodon lived in burrows, and its well-differentiated teeth suggest it ate small creatures like insects, reptiles, and other small animals. Clues to its remains show that this creature was more mammal
Mammal
Mammals are members of a class of air-breathing vertebrate animals characterised by the possession of endothermy, hair, three middle ear bones, and mammary glands functional in mothers with young...
-like than its synapsid
Synapsid
Synapsids are a group of animals that includes mammals and everything more closely related to mammals than to other living amniotes. They are easily separated from other amniotes by having an opening low in the skull roof behind each eye, leaving a bony arch beneath each, accounting for their name...
ancestors. It had a fairly large head/skull with pits in the bone suggesting it had whiskers which, in turn, hints that its body was hairy. An enlarged dentary bone strengthened either side of the lower jaw and contained sockets for its teeth. Its chest and lower back regions were probably separated by a diaphragm
Thoracic diaphragm
In the anatomy of mammals, the thoracic diaphragm, or simply the diaphragm , is a sheet of internal skeletal muscle that extends across the bottom of the rib cage. The diaphragm separates the thoracic cavity from the abdominal cavity and performs an important function in respiration...
- a muscular sheet that contracted to fill lungs, and would have enabled Thrinaxodon to breathe more efficiently than its ancestors.