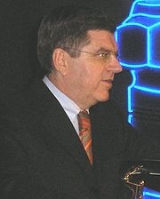 He won a gold medal in the team foil
Foil (fencing)
A foil is a type of weapon used in fencing. It is the most common weapon in terms of usage in competition, and is usually the choice for elementary classes for fencing in general.- Components:...
event at the 1976 Summer Olympics
1976 Summer Olympics
The 1976 Summer Olympics, officially known as the Games of the XXI Olympiad, was an international multi-sport event celebrated in Montreal, Quebec, Canada, in 1976. Montreal was awarded the rights to the 1976 Games on May 12, 1970, at the 69th IOC Session in Amsterdam, over the bids of Moscow and...
.