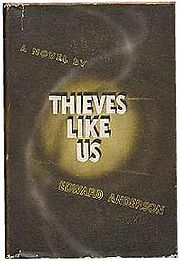 Thieves Like Us was the second and last published novel written by Edward Anderson (1905–1969). It was published in 1937 by Frederick A. Stokes
Frederick A. Stokes
Frederick A. Stokes was an eponymous American publishing company. Stokes was a graduate of Yale Law School. He had previously worked for Dodd, Mead and Company and then briefly had partnerships with others before founding his company in 1890....
. See: Crime Novels: American Noir of the 1930s and 40s by Robert Polito (editor), The Library of America
Library of America
The Library of America is a nonprofit publisher of classic American literature.- Overview and history :Founded in 1979 with seed money from the National Endowment for the Humanities and the Ford Foundation, the LoA has published over 200 volumes by a wide range of authors from Mark Twain to Philip...
[1997].

Anderson later sold the movie rights for $500. The first film version (black-and-white) produced by RKO Radio Pictures was called They Live by Night
They Live by Night
They Live by Night is a film noir, based on Edward Anderson's Depression era novel Thieves Like Us. The film was directed by Nicholas Ray and starred Farley Granger as "Bowie" Bowers and Cathy O'Donnell as "Keechie" Mobley...
. It had a delayed premiere in 1950. Directed by Nicholas Ray
Nicholas Ray
Nicholas Ray was an American film director best known for the movie Rebel Without a Cause....
(his first major directorial effort) and starring Farley Granger
Farley Granger
Farley Earle Granger was an American actor. In a career spanning several decades, he was perhaps best known for his two collaborations with Alfred Hitchcock, Rope in 1948 and Strangers on a Train in 1951.-Early life:...
and Cathy O'Donnell
Cathy O'Donnell
Cathy O'Donnell was an American actress, best known for her many roles in film-noir movies.-Early life:She was born Ann Steely in Siluria, Alabama...
, it was one of the classic noir
Film noir
Film noir is a cinematic term used primarily to describe stylish Hollywood crime dramas, particularly those that emphasize cynical attitudes and sexual motivations. Hollywood's classic film noir period is generally regarded as extending from the early 1940s to the late 1950s...
crime films of its time.

A second film version was later made by Robert Altman
Robert Altman
Robert Bernard Altman was an American film director and screenwriter known for making films that are highly naturalistic, but with a stylized perspective. In 2006, the Academy of Motion Picture Arts and Sciences recognized his body of work with an Academy Honorary Award.His films MASH , McCabe and...
in 1974 and released by United Artists
United Artists
United Artists Corporation is an American film studio. The original studio of that name was founded in 1919 by D. W. Griffith, Charles Chaplin, Mary Pickford and Douglas Fairbanks....
studios under the same title as the original book, Thieves Like Us
Thieves Like Us (film)
Thieves Like Us is a 1974 film directed by Robert Altman, starring Keith Carradine and Shelley Duvall. The film was based on the novel Thieves Like Us by Edward Anderson...
.