Encyclopedia
Theria is a subclass of mammal
Mammal
Mammals are members of a class of air-breathing vertebrate animals characterised by the possession of endothermy, hair, three middle ear bones, and mammary glands functional in mothers with young...
s that give birth to live young without using a shelled egg
Egg (biology)
An egg is an organic vessel in which an embryo first begins to develop. In most birds, reptiles, insects, molluscs, fish, and monotremes, an egg is the zygote, resulting from fertilization of the ovum, which is expelled from the body and permitted to develop outside the body until the developing...
, including both eutheria
Eutheria
Eutheria is a group of mammals consisting of placental mammals plus all extinct mammals that are more closely related to living placentals than to living marsupials . They are distinguished from noneutherians by various features of the feet, ankles, jaws and teeth...
ns (placental mammals) and metatheria
Metatheria
Metatheria is a grouping within the animal class Mammalia. First proposed by Thomas Henry Huxley in 1880, it is nearly synonymous with the earlier taxon Marsupialia though it is slightly wider since it also contains the nearest fossil relatives of marsupial mammals.The earliest known...
ns (marsupial
Marsupial
Marsupials are an infraclass of mammals, characterized by giving birth to relatively undeveloped young. Close to 70% of the 334 extant species occur in Australia, New Guinea, and nearby islands, with the remaining 100 found in the Americas, primarily in South America, but with thirteen in Central...
s and their ancestors). The only omitted extant mammal group is the egg-laying monotremes. 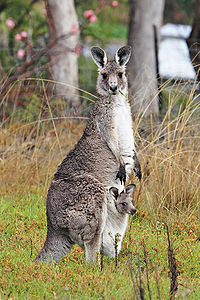 
In the above system Theria is a subclass. Alternatively, in the system proposed by
McKenna and Bell (1997) it is ranked as a supercohort under the subclass Theriiformes:


Another classification proposed by Luo et al. (2002) does not assign any rank to the taxonomic levels, but uses a purely cladistic
Cladistics
Cladistics is a method of classifying species of organisms into groups called clades, which consist of an ancestor organism and all its descendants . For example, birds, dinosaurs, crocodiles, and all descendants of their most recent common ancestor form a clade...
system instead.