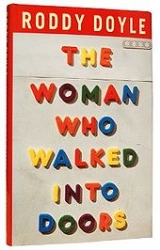 The Woman Who Walked Into Doors
Topic Home
Discussion
0

Encyclopedia
The Woman Who Walked Into Doors (1996) is a novel
Novel
A novel is a book of long narrative in literary prose. The genre has historical roots both in the fields of the medieval and early modern romance and in the tradition of the novella. The latter supplied the present generic term in the late 18th century....
by Irish
Ireland
Ireland is an island to the northwest of continental Europe. It is the third-largest island in Europe and the twentieth-largest island on Earth...
writer Roddy Doyle
Roddy Doyle
Roddy Doyle is an Irish novelist, dramatist and screenwriter. Several of his books have been made into successful films, beginning with The Commitments in 1991. He won the Booker Prize in 1993....
, adapted from the 1994 RTÉ/BBC miniseries Family
Family (1994)
Family is a television drama series that aired on RTÉ One and BBC One in 1994. It was written by Roddy Doyle, the author of The Commitments, and directed by Michael Winterbottom.-Premise:...
.

The novel tells the struggle and survival of an abused wife named Paula Spencer. It is narrated by the victim. The title comes from an incident narrated in the book, where Paula's husband asks her how she received a bruise he was responsible for, and she replies that she "walked into a door." A sequel, Paula Spencer
Paula Spencer (novel)
Paula Spencer is a novel by Irish writer Roddy Doyle.-Plot summary:The novel is a sequel to Doyle's 1996 book The Woman Who Walked Into Doors, describing the life of alcoholic and battered wife Paula Spencer. The second book picks up her life ten years after the death of her husband....
, was published in 2006. The narrative blends her recounting of the circumstances of her childhood, courtship and wedding day, with reflections on those events. The gathering drama is linked to the increasing awareness of moving towards a climax, which is on the one hand the outbreak of violence in her marriage, and on the other hand the violent death of her husband.

The Spencer family first appeared in the RTÉ/BBC miniseries Family
Family (1994)
Family is a television drama series that aired on RTÉ One and BBC One in 1994. It was written by Roddy Doyle, the author of The Commitments, and directed by Michael Winterbottom.-Premise:...
in 1994.

The novel was adapted as an opera by the composer Kris Defoort
Kris Defoort
Kris Defoort is a Belgian avant-garde jazz pianist and composer. He was born in 1959 in Bruges. He also teaches at the Brussels conservatory. His brother is Bart Defoort ....
and the director Guy Cassiers. It received its world premiere in November 2001 at deSingel in Antwerp, and toured extensively before being played in Dublin's Gaiety Theatre in October 2003.
The source of this article is wikipedia, the free encyclopedia.  The text of this article is licensed under the GFDL.