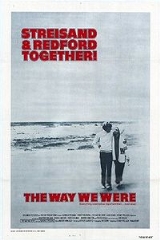 The Way We Were
Topic Home
Discussion
0
Quotations

Overview
The Way We Were is a 1973 American romantic dramatic film co-starring Barbra Streisand
Barbra Streisand
Barbra Joan Streisand is an American singer, actress, film producer and director. She has won two Academy Awards, eight Grammy Awards, four Emmy Awards, a Special Tony Award, an American Film Institute award, a Peabody Award, and is one of the few entertainers who have won an Oscar, Emmy, Grammy,...
and Robert Redford
Robert Redford
Charles Robert Redford, Jr. , better known as Robert Redford, is an American actor, film director, producer, businessman, environmentalist, philanthropist, and founder of the Sundance Film Festival. He has received two Oscars: one in 1981 for directing Ordinary People, and one for Lifetime...
, directed by Sydney Pollack
Sydney Pollack
Sydney Irwin Pollack was an American film director, producer and actor. Pollack studied with Sanford Meisner at the Neighborhood Playhouse in New York City, where he later taught acting...
. The screenplay by Arthur Laurents
Arthur Laurents
Arthur Laurents was an American playwright, stage director and screenwriter.After writing scripts for radio shows after college and then training films for the U.S...
was based on his college days at Cornell University
Cornell University
Cornell University is an Ivy League university located in Ithaca, New York, United States. It is a private land-grant university, receiving annual funding from the State of New York for certain educational missions...
and his experiences with the House Un-American Activities Committee
House Un-American Activities Committee
The House Committee on Un-American Activities or House Un-American Activities Committee was an investigative committee of the United States House of Representatives. In 1969, the House changed the committee's name to "House Committee on Internal Security"...
.

A box office success, the film was nominated for several awards and won the Academy Award for Best Original Dramatic Score
Academy Award for Original Music Score
The Academy Award for Original Score is presented to the best substantial body of music in the form of dramatic underscoring written specifically for the film by the submitting composer.-Superlatives:...
and Best Original Song
Academy Award for Best Original Song
The Academy Award for Best Original Song is one of the awards given annually to people working in the motion picture industry by the Academy of Motion Picture Arts and Sciences . It is presented to the songwriters who have composed the best original song written specifically for a film...
for the The Way We Were
The Way We Were (song)
"The Way We Were" is the title song to the 1973 movie The Way We Were, starring Barbra Streisand and Robert Redford. The song was written by Alan Bergman and Marilyn Bergman, scored by Marvin Hamlisch and performed by Streisand...
. The soundtrack
Soundtrack
A soundtrack can be recorded music accompanying and synchronized to the images of a motion picture, book, television program or video game; a commercially released soundtrack album of music as featured in the soundtrack of a film or TV show; or the physical area of a film that contains the...
recording charted for 23 weeks on the Billboard Hot 100
Billboard Hot 100
The Billboard Hot 100 is the United States music industry standard singles popularity chart issued weekly by Billboard magazine. Chart rankings are based on radio play and sales; the tracking-week for sales begins on Monday and ends on Sunday, while the radio play tracking-week runs from Wednesday...
and eventually sold in excess of one million copies.
Told in flashback
Flashback (narrative)
Flashback is an interjected scene that takes the narrative back in time from the current point the story has reached. Flashbacks are often used to recount events that happened before the story’s primary sequence of events or to fill in crucial backstory...
, it is the story of Katie Morosky and Hubbell Gardiner, who meet at college in the 1930s.

Their differences are immense: she is a stridently vocal Marxist
Marxism
Marxism is an economic and sociopolitical worldview and method of socioeconomic inquiry that centers upon a materialist interpretation of history, a dialectical view of social change, and an analysis and critique of the development of capitalism. Marxism was pioneered in the early to mid 19th...
Jew with strong anti-war opinions, and he is a carefree WASP
White Anglo-Saxon Protestant
White Anglo-Saxon Protestant or WASP is an informal term, often derogatory or disparaging, for a closed group of high-status Americans mostly of British Protestant ancestry. The group supposedly wields disproportionate financial and social power. When it appears in writing, it is usually used to...
with no particular political bent.