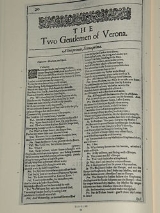 Overview
The Two Gentlemen of Verona is a comedy
Shakespearean comedy
In the First Folio, the plays of William Shakespeare were grouped into three categories: comedies, histories, and tragedies."Comedy", in its Elizabethan usage, had a very different meaning from modern comedy...
by William Shakespeare
William Shakespeare
William Shakespeare was an English poet and playwright, widely regarded as the greatest writer in the English language and the world's pre-eminent dramatist. He is often called England's national poet and the "Bard of Avon"...
, believed to have been written in 1590 or 1591. It is considered by some to be Shakespeare's first play, and is often seen as his first tentative steps in laying out some of the themes and tropes with which he would later deal in more detail; for example, it is the first of his plays in which a heroine dresses as a boy. The play also deals with the themes of friendship
Friendship
Friendship is a form of interpersonal relationship generally considered to be closer than association, although there is a range of degrees of intimacy in both friendships and associations. Friendship and association are often thought of as spanning across the same continuum...
and infidelity
Infidelity
In many intimate relationships in many cultures there is usually an express or implied expectation of exclusivity, especially in sexual matters. Infidelity most commonly refers to a breach of the expectation of sexual exclusivity.Infidelity can occur in relation to physical intimacy and/or...
, the conflict between friendship and love, and the foolish behaviour of people in love
Love
Love is an emotion of strong affection and personal attachment. In philosophical context, love is a virtue representing all of human kindness, compassion, and affection. Love is central to many religions, as in the Christian phrase, "God is love" or Agape in the Canonical gospels...
.

Home-keeping youth have ever homely wits.

O, how this spring of love resemblethThe uncertain glory of an April day.

O jest unseen, inscrutable, invisible,As a nose on a man’s face, or a weathercock on a steeple.

She is mine own,And I as rich in having such a jewelAs twenty seas, if all their sand were pearl,The water nectar, and the rocks pure gold.

That man that hath a tongue, I say, is no man,If with his tongue he cannot win a woman.