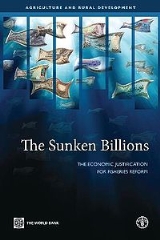 Encyclopedia
The Sunken Billions is a study jointly published in 2008 by the World Bank
World Bank
The World Bank is an international financial institution that provides loans to developing countries for capital programmes.The World Bank's official goal is the reduction of poverty...
and by the Food and Agriculture Organization of the United Nations (FAO). The report shows that the difference between the potential and actual net economic benefits from marine fisheries is about USD 50 billion per year or some USD 2 trillion over the last three decades.

According to the report “by improving governance of marine fisheries, society could capture a substantial part of this $50 billion annual economic loss. Through comprehensive reform, the fisheries sector could become a basis for economic growth and the creation of alternative livelihoods in many countries. At the same time, a nation’s natural capital
Natural capital
Natural capital is the extension of the economic notion of capital to goods and services relating to the natural environment. Natural capital is thus the stock of natural ecosystems that yields a flow of valuable ecosystem goods or services into the future...
in the form of fish stocks could be greatly increased and the negative impacts of the fisheries on the marine environment reduced.”

If fish stock were rebuilt, the current marine catch could be achieved with approximately half of the current global fishing effort. This illustrates the massive overcapacity of the global fleet. The excess competition over the limited fish resources results in declining productivity, economic inefficiency, and depressed fisher incomes.